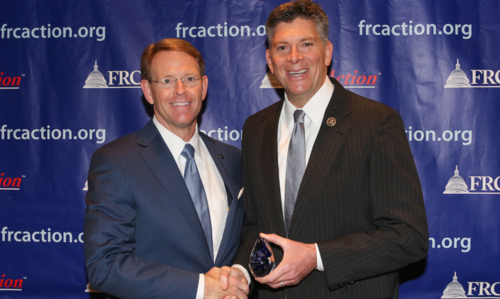 The "True Blue" award was distributed to each of the three federal lawmakers for scoring perfectly in the FRC scorecard evaluation for U.S. House votes, which included votes on issues such as:

“We can be encouraged by elected officials who are willing to be criticized by some in the media and the intolerant voices of secularism as they stand for family values," said FRC Action Director Tony Perkins.

On Rep. LaHood's behalf, Perkins said, "Congress as a whole is often criticized, and rightfully so, but there are individual Members, like Rep. LaHood, who deserve praise for their unwavering commitment to stand for life, family, marriage, and religious liberty.

“Family Research Council Action and the hundreds of thousands of families we represent are proud to recognize these men and women for their faithful work. Our hope is that in the next Congress, he will be joined by many more like him,” Perkins concluded.

LaHood responded saying,“I was humbled to receive the True Blue Award from the Family Research Council this week based on my voting record in Congress. I’m thankful for FRC’s principled advocacy one such paramount issues. I will continue to stand for faith, family, and freedom in the House of Representatives.”

To view a copy of the Vote Scorecard, visit http://www.frcaction.org/scorecard