State Board of Elections to hear complaints against Liberty Principles PAC 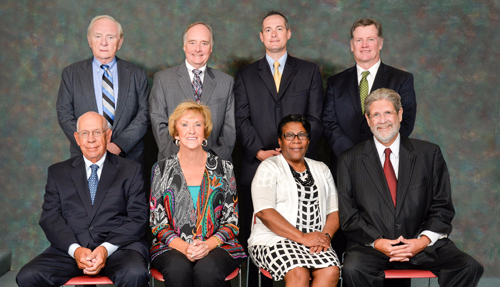 SPRINGFIELD – Today, the members of the Illinois State Board will consider complaints against the Liberty Principles PAC that has invested close to $5M into Illinois Primary Election races. The complaints allege coordination between the PAC and campaigns of candidates it supports. If the board members side with the plaintiffs against the PAC, Illinois Election code suggests the resulting fines could be significant.

Governor Rauner has a stake in today's hearing in that he appointed three of the election board members, and $2 million from his Turnaround Illinois committee was transferred into Liberty Principles PAC.

The board currently consists of four Democrats and four Republicans. Three of the board members were appointed in July 2015 by Governor Bruce Rauner – John R. Keith, Andrew Carruthers and Bill Cadigan.

The fourth Republican – William McGuffrage – was appointed in May 1998, when Jim Edgar was governor.

Complaints before the board are about newspapers that Liberty Principles PAC sent out to three different districts – one in McHenry County, a second in Lake County and a third in a downstate race. Stories appeared in each that seem to favor the candidates backed by Liberty Principle PAC, and included quotes from those candidates indicating they may have spoken with the reporter. The plaintiffs claim that this shows coordination between the candidates and the Super PAC.

A second complaint is that the newsletter did not expressly use the term "Paid for by …" as required by the Election Code.

While Liberty Principles PAC does not report a direct donation from Governor Rauner, it does report a transfer from the Governor's Turnaround Illinois Committee for $1,818,000 January 19, 2016:

A month later on February 29, 2016, Rauner donated $2M to Turnaround Illinois, whose purpose is "to support state legislative candidates who support Gov. Rauner's reforms, and to oppose those who may stand in the way:

That $2M donation added to the $250,000 Rauner gave the group right after it started in April 2015. The only major donor other than Rauner during Turnaround Illinois' inaugural year was wealthy Chicagoan Sam Zell, who wrote a check for $4M to set up the Super PAC.

Illinois Election Code seems to indicate that a violation may have taken place if an Independent Expenditure PAC (IE PAC) coordinates with a candidate. If such coordination takes place, IE PAC could be stripped of its independent expenditure status and changed to a standard PAC, with all the contribution limits that come with that classification. In that case, the IE PAC can be viewed as essentially making a direct contribution to that particular candidate.

The level of the fine for such an offense is determined based on the following from Illinois Election Code Section 9-8.6:

This means that millions of dollars could be at stake with the decision the State Board makes Monday regarding Liberty Principles PAC.