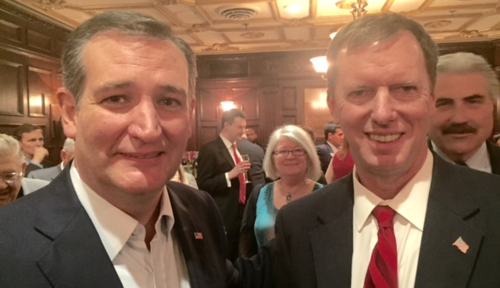 This Tuesday, March 15, 2016 is the Illinois state primary. I'm planning on pulling a republican ballot and voting for Ted Cruz for president of the United States. I also plan to vote for all the Ted Cruz delegates.

This has been a wild primary season starting with 17 candidates on the republican side along with four on the democrat side. I started out as a Governor Scott Walker supporter because he spoke of cutting the size , scope, and cost of government. Unfortunately, he dropped out early but perhaps we will see him back in four years..We are now down to four republicans and two democrats.  I have met or seen most of the candidates  For the record, I plan to vote for the Republican nominee in November, even if it's Donald Trump or Mitt Romney.

It's been a wild week here in Illinois. It included breakfast with Heidi Cruz (Mrs Ted Cruz), attending a John Kasich rally with 1800 people in Palatine,  and a  debate watch party with former Congressman Joe Walsh in Libertyville. On Wednesday I even got a chance to be on Fox  News as I was part of a live broadcast of "On the Record" with Greta Van Susteren. It was a Chicago town hall with Kasich. Later that evening I stopped by the Cook County Republican Committeeman meeting.

Friday was my big day as I worked my day job early so I could head over to see Donald Trump at the UIC Pavilion. After arriving around 1:00pm, I talked to many people in line including folks who waited hours to get in. I lucked out running into a suburban committeeman who got me in a VIP doors,  30 minutes before the doors open at 3:00pm.   Everybody was on alert that a protest was planned inside the arena and outside on the street. You probably know by now, Trump cancelled his event here for security reasons. Fortunately for me, I left early and missed the protest. I had to head over to the Palmer House to see Ted Cruz who was doing an event. He was scheduled to speak at the governor's fundrasier around 6:00pm. Cruz was scheduled to speak later in the evening at the Lincoln Day Dinner in Rolling Meadows which I also planned to attend about 30 miles away.  I did get to say hi to Governor Bruce Rauner before heading to the suburbs. So after seeing the governor, and not seeing Trump, it was time to head to Rolling Meadows. It was a Lincoln Day dinner attended by close to 1500 people. No one was disappointed as Ted Cruz gave a wonderful speech interrupted by constant applause. Afterwards he stayed for autographs, handshakes and photos.

If you want to see Ted Cruz, he is doing an Illinois fly around on Monday. I may see him in Glen Ellen at noon. . http://illinoisreview.typepad.com/illinoisreview/2016/03/cruz-announces-five-stop-fly-around-in-illinois-monday.html

So, I'm voting for Ted Cruz on Tuesday, March 15, 2016 along with all the Cruz delegates. Please join me in voting for TED CRUZ.