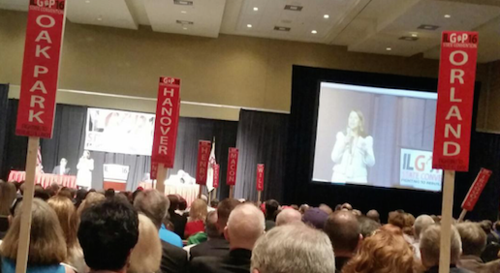 UPDATE X7: In a standing vote, the Minority Report (see below) won with 792 delegates favoring maintaining the one-man, one-woman definition of marriage. Big victory for social conservatives in Illinois. 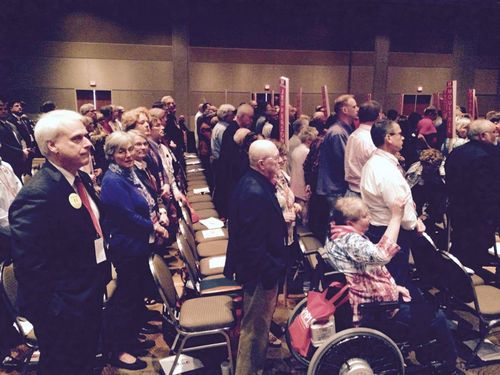 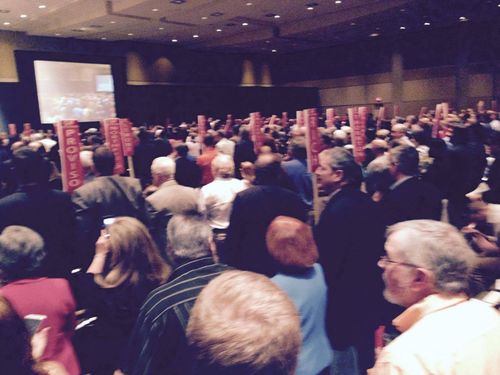 PEORIA – After hearing from Governor Rauner and Congressman Adam Kinzinger, the state convention got down to business – with the first order of business electing their National Committeeman and Committeewoman.

UPDATE x2: Richard Porter told the delegates he was proud to support Donald J. Trump for president, and oppose Hillary Clinton  who would further socialist policies.  He said theres a need to protect constitutional rights, including religious liberties and 2nd Amendment rights.

Next, Congressman Randy Hultgren (IL-14) told the crowd he was proud to be a conservative and to fight for inalienable rights, emphasizing faith, family and community. He said he was celebrating his 25th wedding anniversary next week, and believes it is best for kids to have a mom and a dad.  He closed to a standing ovation.

UPDATE x3: Next on business was the selection of at-large delegates. A reported 103 persons applied to be at large delegates, and 12 are allotted to Illinois – in addition to the National Committeeman, Committeewoman and State Party Chairman.

Names for At Large delegates that were recommend by the committee are: UPDATE X4: Congressman Mike Bost (IL-13) told the delegates he, too, supported Donald J. Trump although his pick was Ohio Governor John Kasich. He voiced his support for children to have a mother and a father – referring to the proposed change to the IL GOP platform.

LaHood said he was proud to represent his 18th CD's conservative values including defunding Planned Parenthood and opposing omnibus budget overspending. The next nominees for the Supreme Court are crucial and arguably the nation's most important election for that reason. LaHood said the process was open and the people spoke by picking Donald J. Trump, who is "better than Hillary Clinton any day of the week."

After a moment of silence to honor the late Judy Baar Topinka, State Comptroller Leslie Munger took to the podium. She is facing a term fulfilling election in November after being appointed to succeed Topinka in 2015.

UPDATE X6 – The convention heard from Illinois General Assembly leaders, proponents and opponents argued the minority report, which refers back to the 2012 Platform.

Breen said, "Let's not redefine marriage. We need to win seats. Vote aye on the amendment to reaffirm marriage between one-man and one woman. There's no groundswell to change the definition.

Opponents to the Minority Report included a minister and Schaumburg Township Committeeman Ryan Higgins, whose comments arguing on behalf of "God, religious liberty and diversity" were met with boos from the delegates.

782 of the convention delegates voted to return to the 2012 Platform wording – 79% of those voting.

Representatives from the Trump organization spoke on the candidate's behalf, and soon after the convention concluded.