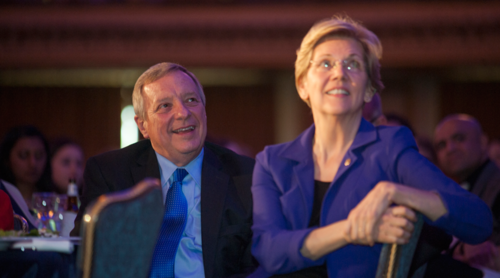 The Environmental Law and Policy Center of the Midwest (ELCP), a left-leaning lobbying and litigating organization, fêted the regulatory victories of colleagues in the Obama administration with its “2016 Dinner and Celebration” at the Chicago Hilton on April 29, 2016. The group hosted two influential Democrat headliners, U.S. Sen. Elizabeth Warren (D-Massachusetts) and Sen. Dick Durbin (D-Illinois). After the speakers left the dais and the dinner party had adjourned for chit-chat around the open bar, the celebration’s point had become crystal clear: “Regulatory statutes are the cornerstone of the progressive agenda.”

There were plenty of corporate listeners with survival at stake: The colorful logo-festooned event announcement in Crain’s Chicago Business weekly newspaper listed some of the host’s funders – nearly 40 wind and solar energy companies, a bank, a private foundation, a giant medical supply firm, three “clean energy” trade associations, and a railroad heavily invested in hauling coal.