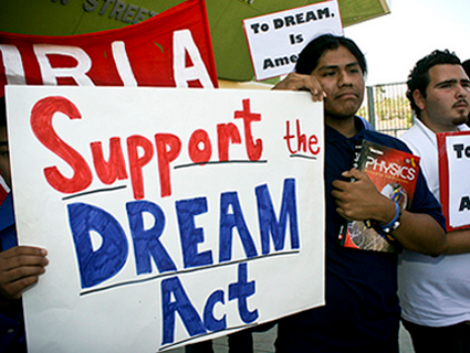 SPRINGFIELD – The University of Illinois is on a mission to usher in a new set of financial and political benefits for students attending Illinois public higher education centers but are not American citizens.

While taxpayers at home are expecting state lawmakers to be furiously working to get a budget passed for the first time in two years, instead, lawmakers are being bombarded with an avalanche controversy-ridden bills that they have little or no time to fully vet.

SB 2196 is likely to face House floor votes over the next few days. SB 2204 is headed for the Governor's desk.

SB 2196, sponsored by four House Democrats and Republicans Bob Pritchard and Ed Sullivan – will add to in-state tuition benefits for students who are in America illegally. The bill will allow non-citizens to be eligible to apply or receive consideration for any student aid or benefit funded or administered by the State, State agencies, public institutions, or the university, including scholarships, grants, awards, stipends, room and board, tuition waivers, or other financial or in-kind assistance, excluding Monetary Award Program grants.

Currently, undocumented students in Illinois are eligible for lower in-state tuition costs and able to apply for the state's privately-funded DREAM Act scholarship set up especially for them by the legislature in 2011.

It is unknown how much the sought change in policy will cost Illinois taxpayers to have state aid funding and benefits available to another predicted 1500 students – the number the University of Illinois suggests would qualify – making the competition pool for financial aid larger.

The sponsors are pushing for students living in Illinois who are not citizens to have the same access to educational and career opportunities as Illinois students born in America have by making state grants, scholarships, and other forms of aid available to those attending taxpayer-funded universities.

As concerns rise for the cost of illegals on welfare and public health care rolls, the legislation will add to taxpayers costs, and will add to Illinois' attractiveness to those immigrating to the Midwest. Illinois would be the second Midwestern state to add this benefit for those in the United States illegally. Minnesota is the other state in the Midwest that allows undocumented student to receive state financial aid, as does California, New Mexico, Oregon and Texas.

The state's nine public universities – who are currently fighting to get funds promised to them from the state's depleted budget – are supporting this effort, as is SEIU Healthcare Illinois Indiana, the Illinois Hispanic Chamber of Commerce, the Latino Policy Forum, and the Illinois Coalition for Immigrant and Refugee Rights.

SB 2196 passed the Illinois Senate 30 to 19, with Democrats crossing the aisle to vote no, and Republicans Chris Nybo and Minority Leader Christine Radogno voting "Yes." Written By Alex Newman   |   01.30.23 As society decays and moves...
Previous article
U.S. Senate Republicans point to Kirk win as evidence GOP will retain majority
Next article
Bill making it easier for non-citizens to run for student trustee goes to Governor