Here’s Where Every Republican Governor Stands on Donald Trump 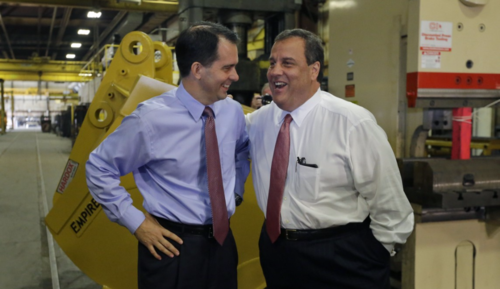 Steve Krakauer at The Resurgent, has listed the 31 GOP governors and their position on Trump. They've grouped them into four categories: Oppose Trump, On The Fence, Support The Nominee, Endorse Trump.

Larry Hogan – Maryland – Hogan says he has no plans to endorse anyone.

Rick Snyder – Michigan – Snyder says he has no plans to endorse Trump, and “I’ve stayed out of the whole thing, and I’m going to continue to.”

Brian Sandoval – Nevada – A new addition to this category as of yesterday, Sandoval previously saidhe would support the nominee, but now is on the fence after Trump’s judge comments.

Susana Martinez – New Mexico – Martinez won’t decide what she plans to do until she meets with Trump personally, which is happening soon.

John Kasich – Ohio – Kasich is in no rush, and has not said whether he’ll support Trump.

Dennis Daugaard – South Dakota – When it comes to supporting Trump, Daugaard says “I’m not there.”

Bill Haslam – Tennessee – Haslam has been critical of Trump, and says he’s waiting on a personal meeting with him.

Scott Walker – Wisconsin – Walker previously said he’d support the nominee, whoever it was, but has backtracked this week and is back to being on the fence.

Nathan Deal – Georgia – Deal says he’ll support the nominee, but not everything he does or says.

Butch Otter – Idaho – Otter endorsed Kasich, but says “I’m all in, whoever gets the nomination.”

Bruce Rauner – Illinois – Rauner is somewhat in the middle of “On The Fence” and “Support The Nominee.” He has said he’ll back whoever the nominee is, but has no plans to endorse or even attend the convention.

Pat McCrory – North Carolina – McCrory says he’ll support the nominee, but didn’t endorse in the primary and doesn’t plan to.

Jack Dalrymple – North Dakota – Dalrymple says he’ll support the nominee, but when asked if he’d endorse Trump, he said, “I’m pretty much down to one choice, aren’t I?”

Nikki Haley – South Carolina – Haley said recently she wouldn’t consider being Trump’s running mate, but did say she’d support him as the nominee.

Matt Mead – Wyoming – Mead says the way Trump has been is “not the way to go about” winning, but that he’d support him as nominee.

Paul LePage – Maine – LePage was an early endorser of Trump.

Chris Christie – New Jersey – Christie was one of the first major politicians to endorse Trump.

By Illinois ReviewBack in 2017, when Republican National Committee...
Previous article
Higgins: Alliance to Censor Speech on the Internet
Next article
Chicago #1 in underwater homes