Thorner/Ingold: Democrats use gun control to circumvent the real issue 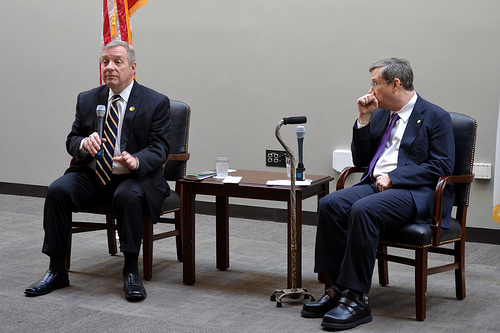 Democrats ripped Republicans on Monday evening, June 20, after lawmakers rejected gun control proposals approximately a week after the worst mass shooting in U.S. history.  None of the four bills in introduced in the U.S. Senate in wake of the Orlando shooting  received enough votes to provide for cloture (that requires 60 affirmative votes to move the debate forward for a vote on the actually legislation).  You can see votes HERE.

The NRA’s success in helping to defeat these measures is not money but common sense. Gun control arising from the Orlando tragedy was manufactured by Obama with no clear solution to any problem. The gunman was fully vetted to pass the NICS background check to purchase firearms, as were all of the active shooters under Obama’s (Bush’s, Clinton’s, etc) watch. None of the proposed measures would have had any effect, other than restrict the rights of honest citizens.

The Republican counter proposals, developed jointly with the NRA, would prohibit those on the no fly list from buying firearms if a federal judge could be persuaded of probable cause within 3 days. The Democrats rejected these two amendments because, in the words of Dick Durbin, “due process takes too long.” In other words, Democrats reject due process unless it suits their political needs (e.g., delaying Hillary’s indictment). The issue is moot, because current law already notifies the FBI, BATF and other agencies if someone on the list goes up for a background check.

Common sense would dictate that it is far more effective to remove criminals from guns than guns from criminals (a millions of law-abiding citizens in the process). Federal law already prescribes stiff sentences for gun violations.

Despite the huge number of guns confiscated in Chicago alone, only one person was convicted for trafficking (52 known illegal guns), and sentenced to time served (3 months awaiting trial). Half of the “non-violent” drug offenders, whose sentences were commuted by Obama this spring, were also guilty of illegal gun possession. On the other hand, an ex-LEO purchased a handgun for his father (LEO discount) in Pennsylvania and made the transfer through a licensed dealer, complete with a background check. He was convicted of perjury for stating he was the intended owner on form 4473 and sentenced to several years in prison. Why? Because his father gave him a check before the actual purchase. The US Supreme Court upheld the conviction.

You would think the opportunity to get gun criminals off the street for 10 years or more would send a message. However, Democrats are consumed by the “control” aspects of gun control and avoid any actions which would solve or mitigate the problems. In fact, “problems” are things which can be for political advantage, and like smoking and drinking, are given only lip service.

By Illinois ReviewLocal Illinois Republican leaders from the 82nd...
Previous article
Di Leo: “You Don’t Need An AR-15”
Next article
Illinois among top 10 locations for taking in Syrian refugees