Biga: Who Started the Dumpster Fire? 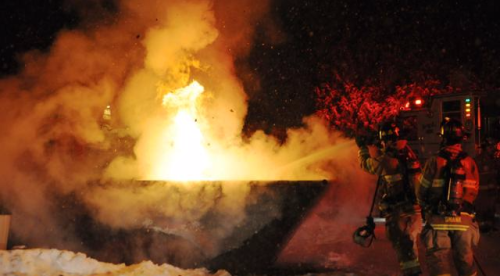 Last week GOP presumptive nominee Donald Trump met with House Republicans and then Senate Republicans. According to reports the second of these meetings was more contentious. Evidently Senator Jeff Flake of Arizona came out of the meeting still unable to support Trump at this point. Senator Ben Sasse though had the choicest words describing the coming election (and by implication the Trump candidacy) as a “Dumpster Fire”.

Well there are two definitions of this urban slang term:

Now there is no way that one can classify the Trump campaign as a complete disaster. It may be behind in the national polls by a few points, but this is no different than many other campaigns for President in the last fifty years where one party is ahead of the other before the convention. And some of those who were behind like Trump is went on to later win. So did Senator Sasse mean the second definition?

What makes the Trump campaign so terrible to the Senator and his fellow travelers that it must be avoided? Sasse would probably say it’s about Trump’s style. And specifically it’s about his comments about temporarily banning Muslim immigration and his comments about Judge Curiel. But that just seems a convenient excuse for the #NeverTrumpers. It’s more than that though.

Is it the insistence on protectionism as a method to be used to return industrial jobs to our country and our workers? Is it the promise to build a wall along our southern border and actually do something about the massive immigration problem in our country? Is it about the coming change in foreign policy that would focus on the best interests of the American people and workers rather than the financial interests of the globalists? Are these policies so unspeakable and strange to them that they can not comprehend or understand why they might be the right policy mix at this time? Do they disagree with their textbooks? This is indeed what I believe it’s all about. It’s something so difficult that they do not want to deal with it.

This condition is what I call Terminal Denial. It’s like the characters in the movie St. Elmo’s Fire. They graduated from their elite colleges and were going to conquer the world. They had the golden ticket! They knew what was in their textbooks and could recite it by heart! It just made so much sense! Carpe Diem!

But the real world had other plans for them didn’t it? And these free trader chaps today, when confronted with contrary opinions about their philosophy, have no idea how to respond other than to latch on to superficial issues and resort to name-calling to tear down their opposition. These are the luminaries who like to refer to Trump as “stupid”.

Free Trade has been a movement that has been in the ascendancy since Cordell Hull started negotiating Reciprocal Trade Agreements in the 1930s. It really took off after WWII with the emergence of GATT or the General Agreement on Trade and Tariffs and was tasked with negotiating reductions in trade barriers. And reductions did occur and over time they got more and more extreme until we reached their ultimate manifestation – NAFTA and CAFTA. This reduction in tariffs appeared to coincide with a period of economic growth in the United States after World War II. So it became generally accepted theory that free trade was a good and positive policy.

But so was Protectionism at one point under different economic fundamentals and conditions.. The United States experienced high periods of economic growth, even reaching 7% in some years, during an era of high protectionism – the 1860s through the early 1900s. Nor was this an era of high inflation as free traders today assert we would be sure to experience if tariffs were raised today. No, the protectionist era is well-known to be a time period of mild deflation or disinflation.

One could, if one were disingenuous, make the argument that during an era of increasing free trade and tariffs we also experienced a higher rate of inflation that has lowered the value of the US dollar by 80% and perhaps this was the cause.

But this would indeed be disingenuous. Because economics is not called The Dismal Science for nothing. Economics is so multi-variable that no one has figured out the magic elixir yet that will bring permanent prosperity to the world. Harry Truman once asked to only have one-armed economists come in to advise him because the economists he kept listening to would say in response to a policy suggestion….. “ on the one hand this may happen, but on the other hand, this may happen”. Economics, my friends, is very hard.

This is because the underlying conditions and fundamentals of the economy change over time and because of these changes the policies that may work in one era (like say lower tax rates, lower tariffs, sound money, and deregulation during the Reagan era), may not work 30 years later because of changes in demographics, geopolitics, resource levels, new technologies, etc.   It’s why continued Keynesian policies that had some positive effect in the 1950s and 1960s ran out of steam in the 1970s. Conditions and fundamentals change. To maximize economic growth and deliver the goods so to speak, economic policies must change as well.

Free trade has run it’s course for our country at this time. Any positive effects that might have been associated with a milder version of it after WWII and then the more extreme free trade agreements since 1993 have withered away and are likely helping to reduce our growth today. 50,000 factories have been closed in the USA since 1993.   This has hurt our working class immensely. As such, this has hurt Aggregate Demand in our country (sometimes Supply-Siders seem to act as if this curve does not exist).

Maybe if there wasn’t so much continued immigration (both legal and illegal) in to the United States, it might not be as deleterious in its effects. But given the current economic conditions and fundamentals, the United States must change its economic policies. It must be pragmatic. If this means raising tariffs and increasing government spending on infrastructure or even higher tax rates on the wealthy, then so be it. My personal view is that higher tariffs, a moratorium on all immigration, lower marginal income tax rates and targeted increases in government spending will get the economy going again. But whatever the right mix is, we need to change the policies.

THIS is what the #NeverTrumpers seem intellectually incapable of dealing with. They are enthralled with what their textbooks and laissez-faire theories tell them regarding freeflows of goods, labor and capital. They assert with the arrogance of a Trotskyite that these policies are working so well and is what is best for everyone. These policies are just so obvious and unassailable to them.   So obvious I guess that they cannot acknowledge that they aren’t working now with our paltry 2% growth rate.  Just watch Bloomberg Go any morning and one can see the so-called “experts” line up against any form of protectionism and rail against Brexit. Oh, how bad! Oh how dumb this all is! How short-sighted!

I think they can’t agree to make changes to their views because it would mean they are wrong. It’s psychological. But it doesn’t mean they were necessarily wrong before. Free trade may be an appropriate policy under certain conditions. But it isn’t now. It also means realizing that those degrees on the walls may not be as valuable as they think they are.

This ideological inflexibility is really what is corroding the minds of the many on the Right.  And this is truly what is wrong with our party. This is the Real Dumpster Fire.  It is what they want to avoid. But the #NeverTrumpers like Senator Ben Sasse are still in the denial stage. Will they come out of it too late to save our country? That is the big question.

By Illinois ReviewIllinois House Democrats maintain a comfortable supermajority...
Previous article
Meet the politicians who stand to get rich off Chicago’s massive property-tax hike
Next article
Chicago activist calls for police to be abolished and disarmed