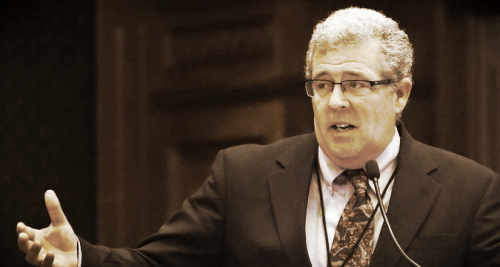 CHICAGO, IL – In response to the failure of Illinois Auditor General Frank Mautino (photo above) to answer questions amidst the ongoing federal and state investigations into his campaign spending irregularities while a member of the Illinois General Assembly, State Representative Dwight Kay (R-Glen Carbon) announced the filing today of House Joint Resolution 158 aimed at removing Mautino from office, a measure with over 20 co-sponsors.

At issue is more than $200,000 Mautino spent over 10 years on gas and vehicle repairs at a Spring Valley service station owned by a city alderman, as well as $259,000 in payments made to a local bank since 1999.

“As the Auditor General labors under the weight of state and federal investigations which could continue for a long duration of time, the citizens of Illinois and the General Assembly must have complete, unreserved confidence that the Office of Auditor General is able to operate effectively and without the hint of scandal,” Rep. Kay added.

In a letter sent last month, over 20 other House and Senate Republican lawmakers urged Mautino to take an unpaid leave of absence until federal and state investigations into irregular campaign spending while he was a state representative conclude, noting that the Auditor General has yet to provide documentation clarifying his campaign expenditures and reporting practices through his now inactive political committee. Mautino has not responded to the letter or to repeated calls to answer official legislative inquiries.

“Frank Mautino cannot effectively do his job as Auditor General while defending himself against potential criminal charges and a State Election Board investigation,” said Rep. Jeanne Ives (R-Wheaton), a Chief Co-Sponsor of the Kay resolution. “If he will not do the right thing on his own and step aside, we have a responsibility as the people’s elected representatives to hold him accountable.”