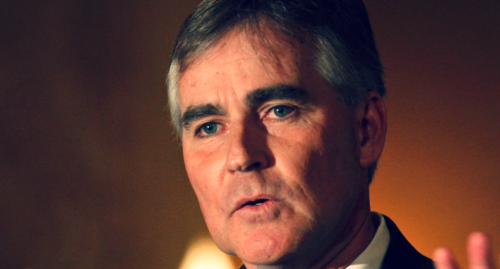 CHICAGO – Former Illinois Republican Party Chairman Pat Brady, told Bill Cameron on "Connected to Chicago" that Donald Trump "cannot win the election." Brady, who is a Kasich delegate to the Republican National Convention, said there's still an outside chance that Trump will not receive the nomination. Brady told Cameron that Trump's solutions are not Republican solutions and that Trump's lack of organization ensures he will lose.

Brady said neither Abe Lincoln or Ronald Reagan would attend this year's convention because of Trump, and that he's not surprised that many members of the Illinois GOP Congressional Delegation aren't attending – although they usually don't. However, Brady believes this absence of delegates may be a way to open the convention and nominate someone other than Trump.

Regarding the presumptive Democrat Party nominee, Brady told Cameron that FBI Director James Comey is "one of the most highly respected law enforcement people in the country" and that he had "no quarrel with his decision not to bring forward" an indictment of Clinton.

Brady admitted that no matter what happens, he's "certainly not voting for Donald Trump" in November; and thinks that four years of Hillary Clinton might be good in that it will allow the Republicans to get the Senate back in 2018, which he presumes the Republicans will lose this year. Brady said he "cannot stomach the idea of Donald Trump being in the White House for a minute," and that Hillary Clinton is a better alternative.

Brady's philosophy is: "If we're going to wreck it [the Republican Party], let's wreck it all the way" arguing that the GOP has to get off the social issues and back to what he describes as Ronald Reagan's themes of "national security and fiscal issues" (NOTE: Reagan ran on his now famous three-legged stool of free enterprise, strong defense, and pro-family social policies).

By Illinois ReviewIn another blow to Illinois Gov. JB...
Previous article
State Rep. Kay files resolution to remove Mautino from office
Next article
Hultgren: “No one should be forced to participate in abortion” [video]