Thorner: Keep ConCon out of the GOP Platform 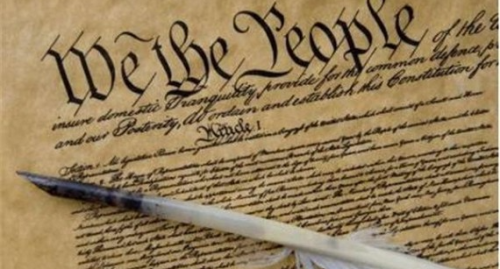 What is "ConCon," also known as a Constitutional Convention?  Article V of the Constitution states:

The Congress, whenever two thirds of both houses shall deem it necessary, shall propose amendments to this Constitution, or, on the application of the legislatures of two-thirds of the several states, shall call a Convention for proposing amendments, which, in either case, shall be valid to all intents and purposes, as part of this Constitution, when ratified by the legislatures of three fourths of the several states, or by conventions in three fourths thereof, as the one or the other mode of ratification may be proposed by the Congress; provided that no amendment which may be made prior to the year one thousand eight hundred and eight shall in any manner affect the first and fourth clauses in the ninth section of the first article; and that no state, without its consent, shall be deprived of its equal suffrage in the Senate.

Here is a video from 2012 that provides a superb illustration of what the platform amendment process is like.  The platform committee begins meeting in only 4 days from now, in Cleveland, starting early Monday morning on July 11th.

There is much at stake in this battle over ConCon.  Will the future of the Republican Party be controlled by "globalists" or by "America First" leaders?  Truly believing that it is through the amendments process that they can put effective checks on judicial activism — such as a Balanced Budget Amendment to deal with the refusal of Congress to deal with a national debt of $19 trillion and growing — ConCon supporters are in step with globalists like the Koch Brothers and George Soros who are determined to take over the Republican Party using the never-used procedure of an Article V Convention as a ruse to purpose amendments to the U.S. Constitution.  These same pro-ConCon individuals, organizations, and legislatures firmly believe that the Founding Fathers included Article V in the Constitution to empower the people to rein in the national government.

A faulty assumption made by the sometimes-conservative proponents of ConCon is that a Constitutional Convention would only result in conservative ideas like a balanced budget.  It never occurs to them that Bernie Sanders supporters would likely show up to demand constitutional amendments requiring the taxpayers to pay for free college and other free stuff for everyone.  Furthermore, conservatives must surely realize that many of their fellow Republicans would not react kindly to limiting the scope of amendments.  Issues like global trade deals and a flow of illegal immigration are important to liberal Republicans.

To the extent that liberals ignore the current Constitution, are they really going to obey a new one?  Instead, a new constitutional convention would possibly gut the Second Amendment, insert harmful "rights" and entitlements, and give the federal government an excuse for raising taxes.  Afterwards, the same challenge of electing good people to do good things would be there, but would probably be made even more difficult than it is now.

Following are ten reason why the delusional Convention of States (ConCon) must be kept out of the GOP Convention Platform:

1. An Article V convention is a "horrible idea" as observed by Justice Scalia in May 2015 at a public event.  Chief Justice Warren Burger criticized it in a similar way in the 1980s.

3. It is the liberal Congress, not the States, that would call the convention under Article V and set the rules for it.  The name "Convention of States" is a deception.  The real name should be "Convention called by Congress," and there is no way to limit what Congress would allow in calling the convention.

5. If the problem is that Congress does not obey the current Constitution, then writing a new one is no solution.

6. Backers of the Convention of States engage in tactics of the Left, such as using secret, undisclosed big donors to finance their project.  The secret donors may have received secret promises about what a new convention would actually do.  David Koch of the Koch brothers, who may be funding the project, supports abortion and gay rights, and refuses to support Trump.

7. It does not help that 38 states would still be needed to ratify it, because the Con Con would become like a runaway freight train impossible to stop, just as state legislatures ratified — often unanimously — the terrible 17th Amendment to change how U.S. Senators are elected.

8. The first thing a Con Con would do is repeal the Second Amendment (right to bear arms).

9. Three necessary circumstances existed for success of the original Constitutional Convention, which do not exist today:  (i) secrecy from the media, (ii) the participants had all given their lives to fight against tyranny in the American Revolution, and (iii) the selfless leader George Washington presided.  We have none of those necessary ingredients today.

10. Supporters of a Con Con today are deluded in thinking they can control it.  They cannot control it, the liberal media will, and everyone knows it.

The "Convention of States", an "Article V Convention," and a "Con Con" are all identical, and conservatives have long opposed this for very good reasons stated above.

The only conclusion to reach is that a Convention of States would be a disaster of epic proportions.