Thorner/O’Neil: FDR’s Handling of a National Security Threat vs. Obama’s 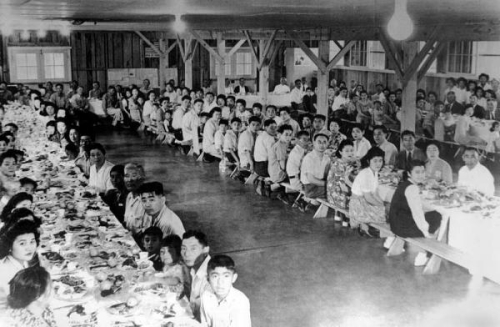 The greatest single external threat to America today is that of radical Islam. It is a national security issue with a political agenda that seeks worldwide domination. Therefore, it is curious that President  Obama and his administration appear unwilling to take the threat seriously, as they have dodged defining even the most obvious acts of terrorism, such as the Fort Hood massacre, by labeling it “workplace violence.” instead. This is not the time for political correctness,  because denying the truth emboldens our enemies while causing our citizens to be hesitant in reporting suspicious behavior. The San Bernardino terrorist attack highlighted that problem, as neighbors saw but did not report the perpetrators strange behavior.

Perhaps most frightening, 25% of those polled agreed:

What is Sharia Law? Why does it matter what American Muslims believe or think?

Sharia is utterly incompatible with the concepts of human rights enshrined in the U.S. Bill of Rights. The following are some liberty-crushing, dehumanizing Sharia sanctions: 1. open-ended jihadism to subjugate the world to a totalitarian Islamic order; 2. rejection of bedrock western liberties — including freedom of conscience and speech — enforced by imprisonment, beating, or death; 3. discriminatory relegation of non-Muslims to be outcasts, vulnerable pariahs, and even Muslim women to be considered subservient chattel; and 4. barbaric punishments which violate human dignity such as amputation for theft, stoning to death for adultery, and lashing for alcohol consumption.

Should concern exist over a flood of Muslim refugees?

The concern regarding the above teachings of Islam is compounded by a flood of Muslim refugees from Syria, an average of 358 per week to be exact, that started arriving in the United States in April of this year and will end at the completion of this fiscal year on September 30.  This "surge" in Syrian refugees, their fast-tracking, was implemented by the Obama administration to make good on its commitment to bring in 10,000 by the end of September, 2016.

It matters not that the FBI has said it cannot vet Syrians for jihadi connections or sympathies because Syria is a “failed state.” Even Obama’s own Director of National Intelligence, James Clapper, has said that the threat of ISIS infiltrating America by hiding among Syrian refugees is a “huge concern.” ISIS has very publicly warned it will do just that, further claiming to have 4,000 fighters in Western Europe already.

What would you think if unvetted Muslims were guarding US power plants?  A firm, Veterans Security, or Vet/Sec for short, are tasked with providing security for some of America’s most sensitive infrastructures, such as power plants.  Historically, the firm hired almost exclusively American veterans, but increasingly they are hiring unvetted Muslim immigrants to provide security at these sensitive locations. Amazingly, the firm is receiving $1200 from the government to hire these workers. Some barely speaks English.  There is nothing wrong with hiring Muslims to guard American infrastructure as long as they are citizens and have passed an extensive background, but if the government cannot screen these immigrants, neither can Veterans Security.

FDR faced a national security threat during WWII.  Political correctness did not rule the day for Roosevelt. Roosevelt's top concern was the safety of every American citizen and he chose to handle the threat from that point of view.  (As a disclaimer:  “It should be noted that Roosevelt made questionable decisions as president, some of which proved to be detrimental to our country.")

Elizabeth Clarke, a patriot and friend who died in her Lake Forest home at 98, wrote this story about FDR and the internment camps for Japanese Americans, which she shared with the authors before her death on July 2, 2016.  Elizabeth’s heartfelt desire was that the information be passed down to future generations. Elizabeth and her family lived through this difficult time in which America was attacked, providing a personal viewpoint that very few have today.

I was there in California in 1941.  After the bombing of Pearl Harbor, the U.S. immediately started to defend itself, we we found out that someone was telling the Japanese Emperor about our shipping, when the ships left port, what they were carrying, how big they were, and other strategic information.  There were several attacks against California by Japanese planes and ships.  The 'Los Angeles Times" reported some of the events on January 25, 1942.

The Japanese community was asked to help find the spies, but they did not.  So after three months the Japanese people were rounded up and put in the camps that had plenty of food, water, schools, and hospitals.  The boys and men were allowed to join the US military, which let many of them leave.

Later in the war, in 1944, the Japanese developed what were known as "Balloon Bombs."  The balloons, 9,000 of them, were huge balloons with baskets hanging beneath them containing small bombs. The balloons were launched into the Trade Winds and sent off to the USA.  Because the Japanese were in camps and not able to tell the Emperor that his bombs had arrived and were soaring over a large part of the USA, the Emperor, not knowing, didn't order bigger bombs for the balloons. Weakened for a long time after Pearl Harbor, the US was not winning the war at the time.  Had the scenario been a different one, we might all now be speaking Japanese.The Camps for the Japanese very possibly saved the US from being defeated.

There were mysterious fires over the Western part of the nation which were reported in the newspapers. One family, out picnicking, let their children climb a tree to look at some material that was caught in the tree. There was an explosion and the children were killed.  That is the only death from the balloon bomb, but think what might have happened if the Emperor had known he could kill us with balloons that carried larger bombs.

On February 1, 1945, a Japanese bomb balloon was spotted by several local residents drifting over the Trinity National Forest area and slowly descending.  No one knew what it was, but an alert forest ranger called the military authorities at the Presidio of San Francisco and reported it.   Meanwhile the balloon came to rest atop a 60 food dead fir tree in the forest near a local road.  Upon examination the balloon bomb still had on board four incendiary bombs and one high explosive bomb and the bomb releasing mechanism was still very much intact.  It later proved to be one of the mot intact bombing balloons to fall into American hands.  As usual in instances of this sort, the local people were told what it was and were asked to keep secret what they had seen.  At the time the Media was "on our side."

Bert Webber wrote a book called "Silent Siege – III", with much information about the balloon bombs.  In his book, which Elizabeth Clarke gave to Nancy Thorner, are maps where the bombs landed and much detail about them.  The first printing of Webber's book was in December of 1992.

The Klamath County Museum and a Balloon Museum in Albuquerque have exhibits of the fire balloons.  According to the curator of the Albuquerque museum, Marilee Mason, “It was one of the greatest secrets of the war. These days it would be over the internet in a minute.”

In 2004 Michelle Malkin was interviewed by Front Page magazine about her newly published book, "In Defense of Interment: The Case for "Racial Profiling' in World War II and the War on Terror". Here is her interview.  As to be expected, Malkin's political views are not appreciated by many in the liberal media, and thus this author and her book received a heavy dose of criticism.

The authors are not recommending that American Muslims be rounded up because of a possible national security threat as FDR perceived Japanese Americans to be during WWII.   Nor would it be possible in this age of political correctness in which the Obama administration will not define those who have declared war against us as Radical Islamic terrorists.

Nevertheless, curtailing the flood of Syrian Muslim refugees into this nation when vetting is not possible and when it has been documented that Islamic terrorist are likely being slipped in amongst the refugees, it would seem  common sense should prevail, as it did during our war with Japan.  Perhaps  Investing in safe zones for the refugees would be appropriate.  What was Obama's response when Merkel of Germany backed the safe zone idea in April of this year?  He indicated that safe zones would not work.

Perhaps our president should at least review what worked for Roosevelt.