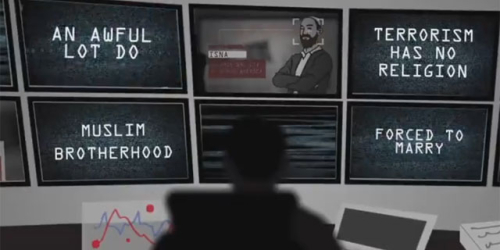 From The Clarion Project -

In implementing its new “hate speech” policy, YouTube has removed a video posted by an anti-extremist organization for “violation” of this very policy. The video in question, posted by CounterJihad.com, points to the Islamist ideology behind terrorism – specifically the implementation of sharia governance (Islamic law) and the goal of building a worldwide caliphate ruled by sharia. Watch the video here.

It goes on to detail two different kinds of jihad – violent jihad and civilization jihad, quoting the infamous “Explanatory Memorandum” where the Muslim Brotherhood’s strategic plans for civilizational jihad in America were laid out.

YouTube’s hate policy states that while they encourage free speech and try to defend your right to express unpopular points of view,” they don’t permit  speech that “promotes violence or hatred against individuals or groups based on certain attributes, such as race or ethnic origin” among other factors.

Besides lacking certain nuances (a common problem of the YouTube short video format), the case presented in the three-minute video does much to explain the facts and little to offend. Listeners might not agree with a particular example the video chooses to illustrate civilizational jihad, however, to state that pointing out these issues promotes hate is certainly a stretch.

One of the reasons YouTube developed this policy was to use this powerful social media tool as a way to fight media savvy extremist groups such as the Islamic State, who use such platforms to recruit new fighters and promote their cause.

CounterJihad quotes Jim Hanson, executive vice president of the Center for Security Policy, who oversaw productions of the video as saying, “I am stunned that the policy that YouTube developed for the express purpose of fighting Islamic State propaganda is now being used to silence critics of radical jihad.

“Instead of counteracting radical propaganda online, these policies are now being used to silence the very speech that YouTube said it wanted — speech that challenges ISIS.”

In fact, content to counter Islamist propaganda was specifically solicited by YouTube. One partner of CounterJihad and the co-moderator of Clarion Project’s dialogue group “Let’s Talk Islamism,” Muslim human rights activist and reformist Shireen Qudosi is also quoted as saying, “YouTube’s removal of CounterJihad’s factual analysis of the threat of ISIS and radical Islam is a devastating blow against credible counter-terrorism efforts.

“No company or individual can legitimately say they support free speech and at the same time set up blockades against the very people doing the work necessary to counter the ideology. There is no other way to look at this.”

YouTube appears to have fallen into the trap of other Western media outlets and governments that have all too often censored themselves to avoid offending Muslim extremists – either for fear of retribution or out of a convoluted notion of political correctness that twists the right of legitimate criticism into accusations of racism and bigotry.

One of the primary purposes of free speech is so that we not devolve into a society where ideas are subject to totalitarian bullying. Yet the slippery slope, whose endpoint is just that, comes in many stages – and they aren’t necessarily comfortable or pretty.

One of the ironies of such a shutting down criticism of Islamic extremism and its promotion of sharia governance is that, without discourse, non-discerning members of the public are much more likely to stereotype all Muslims as extremists. This, in turn, sets fertile ground for bigotry and even violence.

You do not have to agree with a video to oppose censorship of it. Let’s be able to have an honest discussion of what Islamic extremists are planning for us.