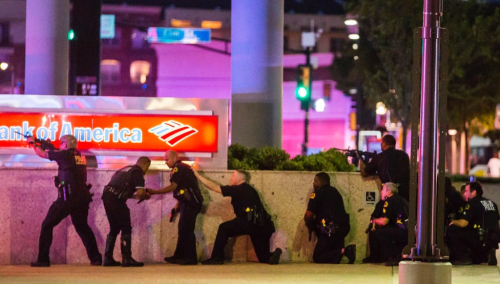 Like the solution always being the same whether the left believes we are in global cooling or global warming, the solution to every terrible act in America is gun control.

There are more than 300 million guns in private hands in the United States and more than 2 trillion rounds of ammunition in private hands. What we are seeing is not an out of control gun problem. In fact, mass shootings in the United States have fallen so much in the past century that the political left has insisted we redefine what a mass shooting is. It is all in the name of gun control.

For the left to talk about mental illness or radical jihadism or black on black crime or any other topic directly related to these episodes of mass violence, the left would have to explore the nature of morality and human depravity. But in the last century, the left has grown so secular that it no longer recognizes a shared morality and rejects the idea of human depravity.

Conservatives look on these acts, whether it be Baton Rouge or Ferguson or Orlando or Dallas and they see a world in moral collapse and struggles between good and evil. Black families have crumbled. Black fathers are in jail while the mothers struggle to keep the family together. Unemployment among black youth is high and people of faith understand that there is something soul nourishing about work. Even in the Garden of Eden there was work.

But we cannot even talk about the Garden of Eden because the left laughs it off. Morality, faith, prayer, and concepts of good and evil are all rejected by the left. So they grasp for something on which they can make a principled stand and it is gun control and the erosion of a right the left refuses to recognize in the second amendment.

Secular reporters lament that there are too many guns in America, but they will not admit there is too much moral decay. In fact, they not only revel in the moral decay and defining deviancy as normal and normal as deviant, but they expect the rest of us to do the same. If you uphold natural law or moral law, you are a bigot.

Because they cannot talk about a morality they no longer recognize or the need for a God they long ago rejected, they are forced to insist more laws will solve problems. It is the metaphysical equivalent of the religious believing more prayer will solve problems. When God is traded in for government, prayer gets traded in for law. The more laws there are, the better off we will be because government is our god now.

The left is incapable of solving the problems of racism and mass violence in this country because the only solution they have is more government. And more government just means more sinners in charge and more sinners is never the answer to any problem. But a left that rejects the notion of sin and human depravity is incapable of understanding that and instead lives in a self-created fantasy land where we are born gay or straight, but can decide to become boys or girls, and when straight boy marries straight girl then straight boy decides to become a girl, his born straight wife is a transphobic bigot. People who believe such nonsense will never be able to substantively deal with the horrors of our age.

So gun control is the only solution they will offer.