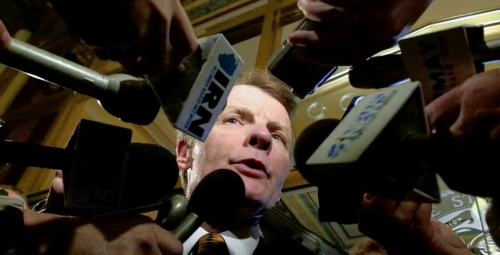 SPRINGFIELD – CapitolFax blogger Rich Miller says he was "duped" into participating in a documentary that he learned only yesterday is financially backed by the Illinois Policy Action – which, he believes, means the film is certain to be anti-Madigan.

"I had no idea that the Illinois Policy Institute was behind this thing, but I did get a couple of hints during Tuesday’s interview when some of the group’s stories were used as a basis for a few of their questions," Miller wrote on  his blog Thursday. "They also asked me about Rauschenberger, which I thought was kinda odd. So, I have no clue what they’re gonna do with my interview. Sigh…"

Miller, who is invited to private events hosted by high level Republicans as well as Democrats, is walking a tightrope in order to not offend his insider scoop sources on both sides of the aisle.

The documentary that created all the furor drew attention Thursday when the Illinois Policy Institute distributed a press release about the anti-Madigan film scheduled to be released in October.

Rich Miller's name was used in the teaser as one of those interviewed:

Illinois Policy Action released the trailer Thursday for the upcoming documentary entitled “Madigan: Power, Privilege, Politics.” Described as an "informational documentary" the film is to take "an unprecedented look at the life and influence of Illinois House Speaker Michael J. Madigan, one of the state’s most powerful political figures of all time."

The press releases goes on to say that Illinois is one of only 14 states without term limits, and the documentary's purpose is to highlight the influence an officeholder can wield in the absence of term limits.

"Madigan is the longest-serving House Speaker in Illinois history and in the nation currently," Illinois Policy Action writes. "Madigan became an Illinois legislator in 1971 and has been Speaker of the House in Illinois for all but two years since 1983. During the time Madigan has been Speaker, Illinois has had six different governors, more than 200 state senators and more than 500 state representatives."

Miller's blog devotees expressed their outrage with how Miller had been misled by the producers. Miller said the invitation seemed harmless enough.

Emergent Order, based out of Austin TX is trying to create a dialogue about why the state of Illinois is in poor shape. Many fingers have been pointed at Michael Madigan, but we’re trying to do a fair/balanced piece about what’s really at the center of it all. We’ve interviewed both people who support and dispute that Madigan is to blame. Interested in your take on that and any other relevant info you’d be willing to contribute.

But here's the trailer – fair and balanced?

Or perhaps a needed scalding of Illinois' powers that be? What do you think?