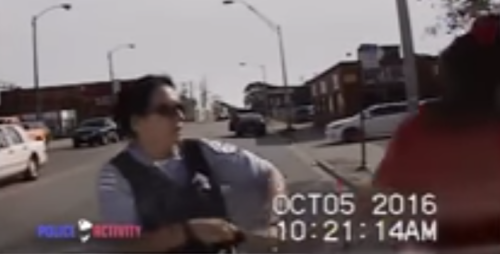 CHICAGO – Chicago law enforcement officers, like others throughout the nation, have watched closely over the past several months when police involved in shootings lost their jobs, their livelihood, faced prison sentences and even dealt with death threats.

All that was on the mind of a female Chicago police officer that chose spontaneously to suffer head trauma and hospitalization rather than defend herself with her firearm against a suspect violently resisting arrest.

In the released video, the cops say over and over that the taser they had employed wasn't working.

Chicago police Supt. Eddie Johnson said the officer feared for her life and also feared the community backlash if she were to shoot Huff with her weapon.

"She thought she was going to die. She knew that she should shoot this guy, but she chose not to, because she didn't want her family or the department to have to go through the scrutiny the next day on national news," Supt. Johnson said.

The Chicago police released dash cam and body camera video of the incident October 5 at the corner of Roosevelt and Cicero. 28-year-old Parta Huff was high on PCP, police say, and had just crashed his car into a nearby business. The video commences when cops in a patrol car spot Huff walking down the street.

He is eventually handcuffed by other officers at the scene and taken into custody. The female officer remains hospitalized more than a week after the initial incident due to the injuries to her head. Huff was charged with attempted murder and aggravated battery.

More and more police are reluctant to use force or act aggressively because they worry about negative media attention that will follow.

The issue has become known as the Ferguson effect, named after the St. Louis suburb where a police officer shot and killed an unarmed black teenager in August 2014. The shooting set off protests and riots that summer and eventually gave way to a fevered national debate over race and policing. Many law enforcement officers have said that the intense focus on policing in the time since has put them on the defensive and hindered their work.

By Illinois ReviewLocal Illinois Republican leaders from the 82nd...
Previous article
Biga: More election disputes could erupt after Nov 8th. It’s happened before.
Next article
Thorner: Time to view Trump through a different set of eyes