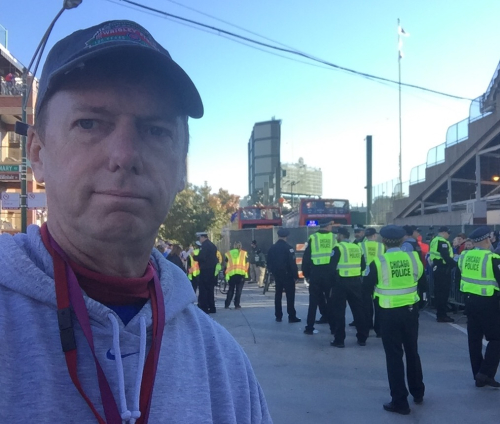 Where else would I be today? This may be the biggest event in Chicago in my lifetime. The Chicago Cubs won the World Series.  I still can't believe it. After presenting my press ID, I was able to stand at Gate K outside of Wrigley Field for the very beginning of this historic parade. It was scheduled for a 10:00am start but rumor was it was delayed about an hour partly because players and families could not navigate the traffic as thousands were here in Wrigleyville to see their heroes. There were hundreds of policemen, city workers, and massive street closures. Since Illinois Review does not have a "sports" section we tie everything in with politics, and why not? It's Chicago. Standing at the VIP entrance I spotted Mayor Rahm Emanuel, Governor Bruce Rauner, Illinois Senators Mark Kirk & Dick Durbin along with Chicago Police Superintendent Eddie Johnson.  In case you didn't know it, politicians love parades, especially "victory" parades.  All these elected officials were stuck on the same bus so perhaps some "bipartisanship" took place.  Each did a mini news conference before boarding the buses.  None spoke at the rally to the crowd probably for fear of being booed. The Chicago Police have had officers on 12 hour shifts for the past six days due to the increased security of the World Series. Last week Wrigleyville remained relatively safe yet there were still 16 homicides on the south and west sides. Even with the Cubs win, crime and violence are still commonplace in other parts of Chicago. By Illinois Review In an unscientific Twitter poll conducted...
Previous article
Photos from the Cubs Parade
Next article
The Tyranny of Feelings