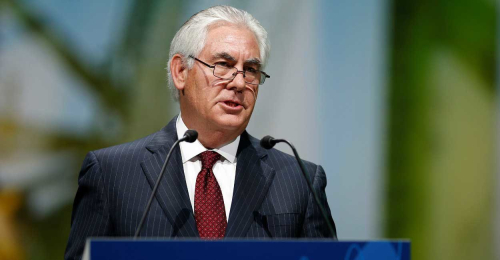 Tillerson worked out a deal five years ago with the Russians that provided access Arctic oil for Exxon Mobil. Lucas writes:

After Russia invaded Ukraine and annexed Crimea, Exxon Mobil halted the deal because of U.S. sanctions, which Tillerson opposed, saying, “We do not support sanctions, generally, because we don’t find them to be effective unless they are very well implemented comprehensively, and that’s a very hard thing to do.”

Tillerson's company directly supports Planned Parenthood, and as national chairman of the Boy Scouts, Tillerson was instrumental in opening the organization to homosexual activists, Lucas writes:

Still, Trump calls Rex a “world-class player and dealmaker,” but if these are the kinds of deals Tillerson makes—sending dollars to an abortion business that’s just been referred for criminal prosecution and risking the well-being of young boys under his charge in an attempt to placate radical homosexual activists—then who knows what sort of ‘diplomacy’ he would champion at [the Department of State]?

Tillerson worked his way up through the ranks of Exxon, a concern Lucas points out:

While Tillerson was the CEO, oil prices broke records and Exxon Mobil’s profits helped make it the most valuable publicly traded company in the world, according to the Associated Press. Tillerson used the company’s profits to explore new regions for oil and acquire XTO Energy Inc., a pioneer in drilling shale to obtain natural gas.

GOP establishment are happy with the Tillerson choice, the Daily Signal piece says.

In August 2015, Tillerson gave $5,000 to the Right to Rise super PAC supporting former Florida Gov. Jeb Bush for president. In 2012, Tillerson contributed $50,000 toward getting former Massachusetts Gov. Mitt Romney elected president, according to ABC News. However, there is no record of him contributing to Trump.

Tillerson is on record supporting the Trans-Pacific Partnership:

“Even when a nation does not have a rich endowment of resources, we have learned that open markets and free trade can bring nations the energy supplies they need,” Tillerson said in a June 3, 2013, speech at the Asia Society Global Forum in the District of Columbia, adding:

But only governments can open the avenues of free trade. … One of the most promising developments on this front is the ongoing effort for the Trans-Pacific Partnership. The 11 nations that have been working to lower trade barriers and end protectionist policies under this partnership are a diverse mix of developed and developing economies. But all of them understand the value of open markets to growth and progress for every nation.

By Illinois ReviewIn the last several days since Illinois...
Previous article
What they’re saying about Rick Perry for Secretary of Energy
Next article
West Dundee teen honored for success on NBC’s “The Voice”