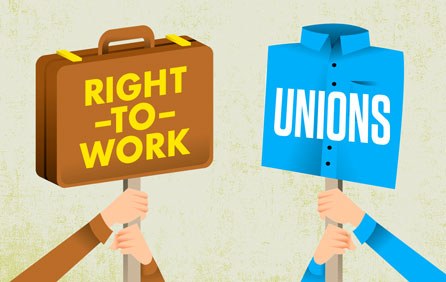 Mark Janus is a David ready to take on a Goliath.

You’ve probably never heard of Mark. He’s just an Ordinary Joe tucked away in a non-descript government building in Springfield. But soon his name may become well-known throughout the United States.

He doesn’t believe any government worker should be forced to pay money to a union that they don’t agree with. So, he is suing the American Federation of State County and Municipal Employees.

You see, Mark is represented by AFSCME against his will. In order to keep his job, he has to pay them a chunk of his pay check.

Earlier this year, a California teacher named Rebecca Friedrichs made the same argument before the U.S. Supreme Court.

I sat through the arguments. Based on the questions being asked by the justices, it looked like the majority of members of the high court agreed with her.

And then Justice Antonin Scalia died.

The court ended up deadlocked with a four-four vote and failed to issue an opinion.

So whoever President Donald Trump appoints to replace Scalia will likely cast the deciding vote.

Trump has said he will appoint someone sharing the views of Scalia. And the next case in the queue is Janus’, which is pending before the U.S. Seventh Court of Appeals.

Jacob Huebert, the Chicago-based attorney for Janus, said he anticipates losing before that court, but is pushing the case because they want the U.S. Supreme Court to consider it. Huebert leads the Liberty Justice Center, a non-profit law firm pushing free-market causes.

Considering it only takes four justices to put a case before the high court, and four justices voted with Friedrichs, it’s likely Janus will be the next case considered.

If the high court rules in his favor, anyone who works for any unit of local, state or federal government anywhere in the United States would no longer have to pay unions anything.

They could choose to, but they wouldn't have to.

Why just government workers? Because everything government does is political.

And, in political matters, free speech is paramount.

Chief Justice John Roberts asked the California solicitor general who argued against Friedrichs' position to give an example of "non-political speech" that the union negotiates at the bargaining table.

The example David Frederick, a lawyer for unions involved in the case, gave was mileage reimbursement rates.

But Roberts countered that even that constitutes political speech because it deals with how tax dollars should be spent.

"Everything that is collectively bargained with the government is within the political sphere," added Justice Antonin Scalia.

In half of the states, workers are already protected from compulsory unionism.

But in states like Illinois, New York and California, which lack right-to-work laws, if Janus prevails before the high court it would give government workers in all states the freedom to choose whether to give their money to a union.

No one should be forced to fund a group they don’t agree with.

And every worker should be free to choose.

Scott Reeder is a veteran statehouse journalist. He works as a freelance reporter in the Springfield area and can be reached at [email protected].