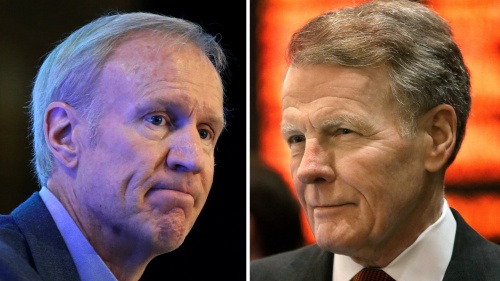 We are two years out from the 2018 elections and he deposited $50 million into his own campaign coffers. Why so much, so soon?

He’s sending a message. Whatever Democrat considers taking him on will be attacked relentlessly.

Rauner, an ultra-rich venture capitalist, has money to burn. And the person it will scorch is whatever Democrat takes him on.

Mike Madigan, who heads the Democratic Party and is about as popular statewide as tooth decay, is busy recruiting liberal gazillionaires to meet the challenge.

There is Chris Kennedy, the son of the late Sen. Robert Kennedy, and then there is J.B. Pritzker, an heir of the Hyatt hotel fortune. Both men, unlike Rauner, were born to great wealth.

It will be interesting if either of these fellows run. Somehow, I doubt it.

Why? Whoever challenges Rauner should expect to be attacked relentlessly. If you are a rich guy living a comfortable life, why would you put yourself through that? And it’s worth noting that neither Kennedy nor Pritzker have ever run for office before.

The interesting thing is that despite his loaded campaign coffers, Bruce Rauner is vulnerable.

First off all, mid-term elections almost always favor the party that doesn’t hold the White House. And given the animosity Democratic voters hold toward Donald Trump, particularly in blue states like Illinois, Rauner will likely be swimming against the tide.

It doesn’t mean he will drown, but it will be a tougher race than when he first captured the Executive Mansion.

And I make that statement reluctantly. Of all of the governors who have served in my lifetime, he comes the closest to matching my own libertarian ideology.

I want government out of my wallet and out of our private lives.

But Illinoisans are weary of the constant war between Madigan and Rauner.

Rauner views his election as a voter indictment of the longtime political boss, who he blames for Illinois’ fiscal ills.

And he’s right for blaming Madigan. But Rauner has done a poor job of messaging about why he is engaged in this struggle. I’ve covered every governor since James R. Thompson and this administration has done the worst job by far of sharing its vision for the state.

Because of this, voters view this conflict as a personality clash between two egos rather than a conflict between divergent political philosophies.

Madigan is hell-bent on making sure Rauner has no successes to run on when he seeks re-election. And the people of Illinois are suffering for it.

Many voters have taken to viewing Madigan like mildew on the shower curtain. They don’t like it, but it’s hard to get rid of so they just put up with it.

While they may agree with much of what Rauner is trying to accomplish – term limits, independent redistricting and lower property taxes — they may view Rauner as the more expendable part of the equation in ending the strife in Springfield.

I anticipate the next two years of the Rauner administration will look pretty much like the last two. The state will fall further behind in paying its bills and we will go four-years-straight without a state budget.

The majority in the legislature will do everything it can to block any Rauner endeavor.

And don’t be surprised if state workers go on strike in the middle of this chaos.

Madigan, who collects power the way some grandmothers collect buttons, has every interest in continuing to stir the chaos. After all, Rauner is a threat to his power.

Scott Reeder is a veteran statehouse journalist. He works as a freelance reporter in the Springfield area and can be reached at [email protected].