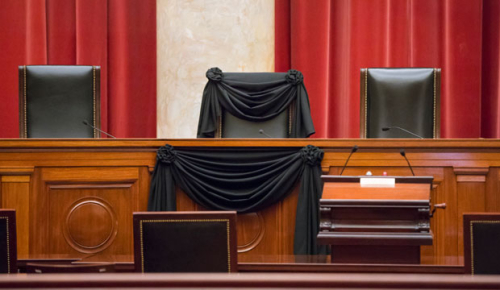 A conference call held Friday morning, December 2nd to discuss the Supreme Court vacancy sounded an alarm that President-elect Donald Trump is being pressured from the media to nominate a person based more on gender than stand on the pro-life issue.

The call was led by the late Phyllis Schlafly's son Andy Schlafly, who is President of the Legal Center for Defense of Life, Eagle Forum Education & Legal Defense Fund, and General Counsel, Association of American Physicians & Surgeons. Notable is that Andy Schlafly went to law school with President Barack Obama.

Although President-elect Trump pledged to pick a pro-life candidate to replace Justice Antonin Scalia, he didn't promise to stick to the list of 21 names given him to consider. There will be pressure from the media to pick a woman from the list, because of media awareness that all four women on Trump's candidate list lacks pro-life credentials and are, therefore, unacceptable candidates for the vast majority of those that supported Trump for president.

Every trick will be used by the other side to discredit Trump's Supreme Court nominees, such as false news reports claiming that a principled pro-life candidate is unwilling to be named as a Supreme Court nominee or that the nominating battle is too daunting a process to go through. This is not true, as pro-life candidates are willing to go through a confirmation hearing even if as vicious as the one endured by Clarence Thomas.  It is a given that nothing garners greater resistance from the Left than attempts to overturn Roe through the nomination of a pro-life Supreme Court justice.

In Donald Trump's appearance on Sean Hannity's Fox cable show on Thursday, December 1, Trump told Hannity that he would pick a pro-life candidate to fill Antonin Scalia's place on the Supreme Court, as Trump had first pledged to do during his final presidential debate with Hillary, and that his announcement would be made shortly.  Trump said he had three or four names in mind.  Unfortunately, Hannity didn't ask Trump to follow through by naming names.  As such, can we really expect Fox News to help in getting the message to Trump about suitable Supreme Court nominees?

Andy Schlafly considers the appointment of Supreme Court justices a very important issue.  Many elected or appointed officials only serve two year terms, but a Supreme Court Justice can remain in power for 30 years.  Presently the appointment of a Secretary of State is receiving extensive media coverage; however, the Secretary of State has no influence over pro-life issues.

Schlafly recalled the year 1981 when President Regan appointed Justice Sandra Day O'Connor.   Later on in his administration Regan appointed Justice David Souter.  As Schlafly warned:  "We cannot stand by and wait for it to happens again given Trump’s pledge to appoint pro-life justices."  Yet some of Trump's advisors and senators are pushing Trump to appoint names on the list that are not really pro-life.  Trump does rely on his advisors to give him candidates that are pro-life.  It is unconscionable that Trump has been falsely told that all twenty-one candidates on the list are pro-life, but they are not.

Non-negotiable issues for Andy Schlafly:  1) Candidate must be pro-life and have a pro-life record.  2) Candidate must be able to stand up against the pro-abortion side and the media.  If not, that person is unacceptable as a Supreme Court justice.  How is it that so many of the twenty-one individuals on Trump's list are not pro-life?  The Federalist Society supplied half the candidates on the list.  It's not a pro-life organization!

Personal vouching of a Supreme Court candidate is suspect

Personal vouching for a Supreme Court nominee, even by another conservative, will not work.  It is folly to engage in such wishful thinking.  President George H. Bush was told that David Souter was pro-life, then Souter went to the other side under pressure from the pro-abortion side and the media when the media wrote negative stories about him.

Trump relies on Reince Priebus, formerly Republican Party Chairman who has been appointed as Trump's chief of staff, to give him good information.  We already know that Trump is pro-life and wants to fill the vacancy left by Scalia's death with a candidate in the image of Scalia.  If Priebus recommends a candidate to Trump who isn't pro-life, the nomination will have to be withdrawn, and Reince's betrayal will be made known to Trump and to the public.  Such a falsehood by Priebus to the president he serves, and the embarrassment it would cause Trump, would demand that Priebus be the first to leave the Trump administration.  Priebus is well aware of Trump's pledge to select a pro-life judge.  Twenty-two percent of voters did indicate that selecting a pro-life justice to replace Scalia was of great importance.

The U.S. Senate could likewise be party to a stunt to undermine Trump.  Sen. Mitch McConnell, Senate Republican Majority leader, doesn't like to have pro-life votes and hesitates to bring them up.  Senator McConnell might indicate that a pro-life nominee could not be confirmed.  But this is not true.  According to Andy Schlafly, we have a pro-life Senate.   Fifty senators are pro-life, and Mike Pence would be the tie breaker.  If Senator McConnell should offer the excuse that a pro-life justice nominee would be impossible to confirm, it could then be asked, how did it happen that Antonin Scalia, Samuel Alito, Clarence Thomas, and John Roberts were all confirmed with a Senate less pro-life than today's Senate makeup?  If McConnell should insist a pro-lifer can't get through the Senate for confirmation, the remedy is to pick another pro-lifer, and still another one, and then continue appointing pro-lifers until one is confirmed.

Not to be dismissed is McConnell's pipeline to Reince Priebus.  McConnell could vouch as acceptable a phony conservative pro-life candidate to Priebus who would, in turn, inform Trump that the suggested candidate was a sure bet to sail through a Senate confirmation.  It therefore counts for nothing should Priebus tell Trump that such and such candidate is pro-life, as   Souter and Kennedy were said to be pro-life when appointed by presidents George H. Bush and Ronald Reagan, respectively.

Below are some salient points from the Eagle Forum SCOTUS letter:

Mr. Schlafly expressed concern that Trump's Supreme Court pick could come down to Judge Diane Sykes, an unacceptable pro-choice woman, when pressure is applied on Trump to appoint a woman.  Judge Diane Sykes would be vigorously opposed by Eagle Forum, which would then create a huge embarrassment for Trump.  When withdrawing Sykes' nomination, Trump would have every right to demand why he wasn't better informed about Judge Diane Sykes before nominating her.

As Andy Schlafly remarked:  "There must be a public push back if Trump appoints a justice who is not pro-life, for there is so much at stake to do otherwise.  If we are not willing to fight for a pro-life candidate now to replace Scalia, it will never happen."