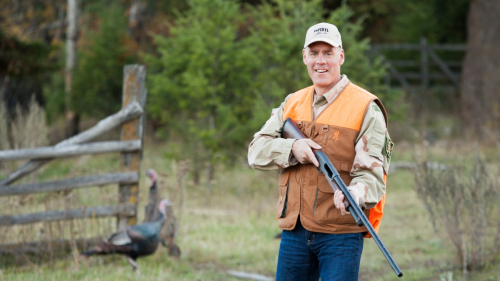 Zinke said as Interior Secretary he will uphold Teddy Roosevelt's belief that America's treasured public lands are ‘for the benefit and enjoyment of the people.’

Rep. Zinke's voting record supports a philosophy of managing public lands, which calls for multiple-use to include economic, recreation and conservation, the campaign said. He has spent his time in the U.S. House on Interior issues ranging from federal mineral leases to tribal affairs to public lands conservation.

“I am pleased to nominate Congressman Ryan Zinke as our Secretary of the Interior. He has built one of the strongest track records on championing regulatory relief, forest management, responsible energy development and public land issues,” said President-elect Donald J. Trump.

“As a former Navy SEAL, he has incredible leadership skills and an attitude of doing whatever it takes to win. America is the most beautiful country in the world and he is going to help keep it that way with smart management of our federal lands. At the same time, my administration’s goal is to repeal bad regulations and use our natural resources to create jobs and wealth for the American people, and Ryan will explore every possibility for how we can safely and responsibly do that.”

“As someone who grew up in a logging and rail town and hiking in Glacier National Park, I am honored and humbled to be asked to serve Montana and America as Secretary of Interior,” said Rep. Zinke. “As inscribed in the stone archway of Yellowstone National Park in Gardiner, Montana, I shall faithfully uphold Teddy Roosevelt's belief that our treasured public lands are ‘for the benefit and enjoyment of the people.’  I will work tirelessly to ensure our public lands are managed and preserved in a way that benefits everyone for generations to come. Most important, our sovereign Indian Nations and territories must have the respect and freedom they deserve.  I look forward to making the Department of Interior and America great again. May God bless Montana, God bless America and God bless the troops who defend her.”

As a fifth-generation Montanan who grew up near Glacier National Park, Rep. Zinke has had a lifelong appreciation for preserving America’s natural beauty. He has consistently led the efforts to renew the Land and Water Conservation Fund in Congress, and has also been a firm advocate for our nation’s sportsmen to gain access to our public lands with the SCORE Act and SHARE Act. Rep. Zinke also introduced the Resilient Federal Forest Act in Congress, which initiated new reforms for revitalizing America’s timber areas and preventing wildfires.

Zinke served for 23 years as a U.S. Navy SEAL, retiring in 2008 with a rank of Commander after leading SEAL operations throughout the globe. After serving in the Montana State Senate, Zinke became the first Navy SEAL to serve in the U.S. House of Representatives when he was elected in 2014. In Congress he has served on the Committee on Armed Services and the Committee on Natural Resources. Rep. Zinke is an adopted member of the Assiniboine Sioux Tribe at the Fort Peck Reservation in Northeast Montana. Rep. Zinke is married to his wife Lolita and they have three children.