West Dundee teen honored for success on NBC’s “The Voice” 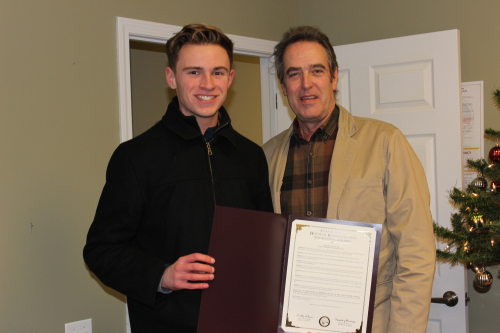 CRYSTAL LAKE – Retiring State Rep Mike Tryon (R-Crystal Lake) appreciates good music – after all, when he's not at the Capitol, he's often found jamming with fellow lawmakers in their "Boat Drink Caucus" band. So it wasn't a big surprise that he would give special notice to a Dundee Crown High School student in his district that appeared this year on NBC's "The Voice."

“I was watching when Riley did his blind audition on 'The Voice,' and his talent almost knocked me out of my chair,” said Tryon. “Such strong vocals coming from a 16-year-old was certainly a surprise. What didn’t surprise me was that two of the four judges wanted him for their team and that he eventually advanced far into the competitive 11th season of the show.”

Proud of the hometown talent when 16-year-old District 66 resident Riley Elmore advanced to the show's "Top 20," Rep. Tryon introduced HR 1499 to congratulate him, part of which says:

Elmore developed a passion for music, especially jazz, at an early age, and began playing the trombone in the fourth grade. While playing in his school’s jazz band he discovered a passion for the music of Frank Sinatra, but it wasn’t until late in middle school when de decided to seriously explore his talent as a vocal musician.

“I sang in a play in middle school and then was involved in choirs in high school,” said Elmore. “It was just about this time last year when a friend convinced me to apply for the Chicago auditions for The Voice at Navy Pier, and the entire experience was beyond anything I could have ever expected.”

According to Elmore, approximately 40,000 people auditioned across the country for the 11th season of The Voice, and only 48 made it past the blind auditions. “When they turned their chairs around I knew I had to keep it together and I did,” Elmore said. “It wasn’t until later when it really sank in that it really happened.”

Tryon said that during his time on television Elmore displayed maturity beyond his years, and that he represented his school, his town and his county with distinction.

“We haven’t heard the last of this talented young man,” Tryon said. “I have no doubt that his stint on The Voice was just the beginning of what will be a very successful career in music.”