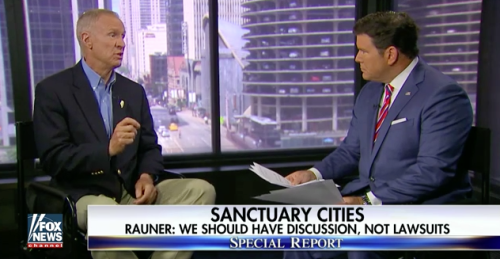 The interview created a national discussion firestorm, frustrating the state's political Right and Left, who said Rauner's responses created more questions than answers for the people of Illinois.

Here's a transcript of the exchange, supplied by Fox News Channel:

BRET BAIER, FOX HOST:  Thanks Marr. Joining us now to talk about this issue and others, Republican Governor of Illinois Bruce Rauner.  Governor, thanks for being here.

BAIER:  We’re just talking about sanctuary cities issue. And obviously you had the Mayor here suing the Attorney General, the Justice Department on Monday over this threat to cut anti-crime federal funds because Chicago’s a sanctuary city.  Who are you with on this one, President Trump or Mayor Emanuel?

RAUNER:  Well, I can tell you this, Illinois is a state built by immigrants.  My grandparents were immigrants and we — one in seven people in Illinois are immigrants.  So this is a very, very big issue.  I personally feel like we’ve got to have a system of immigration that works.  Our system is broken.  We need fundamental, dramatic immigration reform.

RAUNER:  Well, I tell you this, the system is broken.

RAUNER:  Well, I tell you this; the system is broken.  We need to keep our people safe.  Here’s the issue; we have to put priority on keeping the people of America safe and making sure that we have laws that we enforce and that the laws are rational and they’re implemented everywhere.

BAIER:  So, you have this bill, SB-31 on your desk.  According to the Chicago Tribute, the bill would prohibit police from searching, arresting, or detaining a person because of their immigration status, absent a federal criminal warrant.  It would also create so-called safe zones in state-funded schools, healthcare centers, secretary of state facilities and block state and local enforcement agencies from creating registries based on race, religion, and national origin.

RAUNER:  So, our staff is evaluating that bill right now.  In fact, we are meeting with law enforcement agencies and law enforcement leaders in the state to get their views on it.  We’re going to evaluate it and then we’ll make an announcement about how we’re going to deal with that.

BAIER:  There are some families who say they’ve lost loved ones because of sanctuary status or policy and they’re trying to meet with you.  Do you want to hear that point of view?

RAUNER:  I want to hear everybody’s point of view.  I work for everybody in the state of Illinois.  Our immigration system is broken and we need to have a system that keeps the people of Illinois safe, the people of America safe.  We’ve got to put that as the first priority.

BAIER:  So I’m still trying to get, do you agree with the president or not that sanctuary cities are a problem – yes or no?

BAIER:  All right, let’s try this — here is the head of ICE at the White House just a couple weeks ago.

BAIER:  So do you agree with him?

BAIER:  All right, I guess I’m going to turn to the budget crisis that you’ve been dealing with here in Illinois.  Just recently, July 6th, the legislature passed the first budget in more than two years.  Unpaid bills racked up to more than $15 billion before that budget was passed.  Illinois has the lowest credit rating of any U.S. state.  Did you lose control of that budget standoff?

RAUNER:  Well, I tell you, we have a broken budget situation in Illinois and the General Assembly forced through a massive tax hike on the people of the state with no reforms.  And Bret, the budget is still not balanced.  It’s a stunning failure.  We have a broken system in Illinois.  And this is – we’ve got to stand up and change it.  And nothing is fixed.

That tax hike will not fix anything.  It’s just going to push more employers out, more job losses, and erode our tax base.  It was a disaster.

BAIER:  So how do you do it?  you came to office as a plainspoken businessman who said he was going to reform things – and you wouldn’t have any tax increases without reform.

BAIER:  So now you have the tax increases, but where’s the reform?

RAUNER:  Exactly.  That’s why that budget was a disaster.  Terrible situation.  Bret, here’s the fact; we in Illinois have not been creating jobs for decades.  I’m proud; since I became governor, we’ve added 120,000 net new jobs.  But for 17 years, we basically had the same number of jobs in Illinois that we had 17 years ago.  And in the meantime, Bret, our government spending has gone up 66 percent.

BAIER:  You’re up against a record-holder, the longest-serving House speaker in known history, House Speaker Madigan.  Is he too powerful in Springfield to work with?

BAIER:  Did he win this battle against you?

RAUNER:  I tell you, he’s been in power – he’s been speaker for 35 years.  And he’s been in the General Assembly since just right around the time that the Beatles broke up.

I tell you, he’s been in power – he’s been speaker for 35 years and he’s been in the general subway (ph) since just right around the time that the Beatles broke up, it’s an amazing run.

And in that period of time, we’ve had massive job losses, deficits, biggest unfunded pension liabilities in America, ramped corruption (inaudible) patronage.  He has been overseeing a stunning failure of government.

And one of the reasons I ran was to stand up to him and the system and change it.  We will never give up and we’ll never back down.

BAIER: are you running for re-election?

RAUNER:  No formal announcements, yet but–

RAUNER:  We will never give up the battle to make Illinois strong, and proud, and prosperous.

BAIER:  you’re a billionaire; you’re a successful business man.  Why do this if you’re you are going to hit the wall like this?  How do you change it?

RAUNER:  Well you know what, by persistence.  The people of Illinois come up to me everyday – and I get democrats who come up to me when I’m around town here or down at the state fair, they say “Governor, stay strong, we’re with you, don’t back down, don’t give in, stick to your guns.” And a lot of times they’ll say “And I’m a democrat, I don’t even normally support republicans, you’re the first republican I’ve voted for, I’m voting for you again, and we know Madigan’s a problem you stand up and you fix.”

BAIER:  All right so you talk about Madigan, you demonize democrats in Springfield, but basically there is gridlock here.  You’ve got rising state debt; you have increasing taxes, and kind of a lousy economic climate right now….

BAIER:  Businesses may leave your state.

BAIER:  So what would be different in a second term?

RAUNER:  Oh I can tell you a dramatic change.  The people of Illinois are again (ph) with opportunity next November in ’18 to decide whether they’re going to keep supporting the folks in the general assembly who support the speaker and support the status quo.

And this isn’t about democrats versus republicans.  This is about good government versus the corrupt machine with politicians who run government for themselves.  Bret, when I first got to know the speaker nine years ago he told me – asked him “What’s your goal of improving the quality of life for the people of Illinois?”

He laughed, he said “I’ve got no goal like that Bruce, I do two things, I manage power and I make money for managing power.”  He was proud of it, I almost threw up my soup at lunch.  That’s why our system’s so broke, and we’ve got to stand against that.

BAIER:  President Trump wants to repeal and replace Obamacare, do you agree?

RAUNER:  Well I can tell you so much of our Affordable Healthcare Act is broken, it needs to be repaired.  I’ve expressed concerns about what it might do to some of our most vulnerable residents in Illinois; I’ve shared that with the Federal government.

BAIER:  School funding, you have a decision to make about how to solve school funding here in Illinois.

RAUNER:  That’s right, well the democrats before I became Governor, cut school funding for our State four times in the prior 10 years.  We were the worst funded schools in America from a state government perspective as a percentage of overall spending, terrible failure.

And as a result, we had the biggest gap between what low income schools got and high income.  I said “Change it, make it more equitable.”  We passed the Good School Funding Bill on a bi-partisan basis that I championed (ph).

But the democrats and the majority of the House inserted a poison pill, a pension bail out for the city of Chicago, hundreds of millions of dollars every year diverted away from classrooms in the suburbs and down state, so I had to mandatory veto that bill and we’re going to get it fixed so it’s fair and more equitable for everybody.

RAUNER:  I could tell you this, my job as Governor is to work with every President and every Congress, and I worked with President Obama, I work with President Trump, I work with the members of Congress.  I represent the people of Illinois and I want to make sure their interests are looked out after at Washington D.C.

RAUNER:  Well, I’m glad to be here with you Bret.

BAIER:  –look forward to having you back.