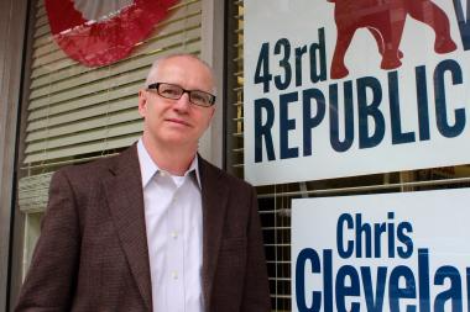 CHICAGO – Chris Cleveland, chairman of the Chicago GOP and a conservative leader in the party, wrote to the IL GOP's State Central Committee this week, expressing the frustrations the conservative base is having with the party's direction and Governor Rauner's bullying tactics within the party ranks.

State Central Committee member,
I'm writing to alert you to a problem with the Rauner campaign's use of state party resources, and to problems within the state party generally.
A few days ago, a Chicago GOP staffer was informed that he could no longer use a desk within state party headquarters. We had put him there a few days a week so we could coordinate our activities with the state party. In the past, the city GOP has frequently supplied volunteers for state party-backed candidates.
The reason they offered was a press report that I was under consideration as Rep. Jeanne Ives running mate. (Jeanne and I have talked, but as of this moment she has not yet made a final decision, and she has a number of very good candidates to choose from.)

Subsequently, the state party cut off our GOPDataCenter access.
Consider what has happened here: the Rauner campaign has ordered the state party to cut off an elected, regular Republican organization, based purely on the rumor that the head of the organization *might* be working with a candidate in a primary against him.
To the best of my knowledge, the state central committee has neither endorsed nor slated Bruce Rauner. And given the widespread doubt within the Republican Party over his policy choices and his ability to execute, it seems to me that some dissent is warranted.
But whether you love him or hate him, this behavior is abusive, and the state central committee should not stand for it.
Our difficulties with the state party go beyond this recent behavior.
It has long been the position of senior staffers in the state party that the Chicago GOP should not be running candidates in the city. The theory is that this just "activates" the other side and reminds them that there is an election. We in the Chicago GOP have rejected this position, and believe that a vigorous attack in the belly of the beast has many benefits.
While the Chicago GOP is a small organization, and Chicago is often derided as a Democratic bastion, the number of Republican voters here is not small. We cover 7.5% of the Republican voters in the state, more than any county except Cook and DuPage, with 20,000 more voters than the next largest county, Lake. You ignore this constituency at your peril.
Four years ago, we ran candidates across the city for the purpose of generating enthusiasm and volunteers for phone calls and door knocks. In close coordination with the Rauner campaign, we flooded their offices with volunteers and executed 363,000 voter contacts, 263,000 of which were door knocks. We were able to raise Rauner's vote in Chicago to 20.63%, just a hair above the magic 20% threshold. And he won.
If Rauner is on the ballot this fall, this won't happen. Not because we wouldn't want to; we're loyal Republicans and Rauner over Pritzker would be an easy choice. It won't happen because the state party has consistently undermined our efforts to recruit here, and because there is zero enthusiasm for this governor. Even prior to HB 40, we couldn't get people to sign his petition.
It's past time for the state central committee to step in and right the ship. First, I ask that you prevail upon Bruce Rauner to stop the petty retribution. This is the Republican Party, not the mob, and it's time for them to grow up.
Second, I ask that you consider separating the state party apparatus from the Rauner campaign. They are acting as one and the same, but our party is bigger than Bruce, and we have broader concerns than his personal well-being. Notably, we need to take back the House, and we have two very viable candidates for state rep in Chicago, both of whom *might actually win*. A party must support such activities.
I am open to discussing this matter with any of you individually.