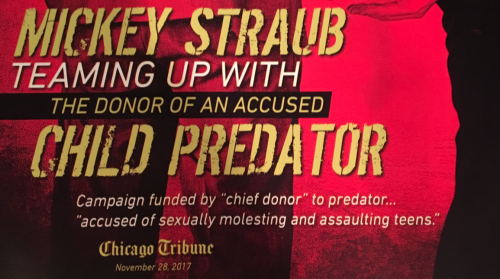 BURR RIDGE – The Illinois Republican Party is accusing Burr Ridge's mayor of doing anything to gain power – even taking money from a political supporter with "deep ties to a man accused of 'sexually molesting and assaulting teens."

The Illinois GOP's return address is on mailers going to Republicans in a primary that has turned nasty as the popular Burr Ridge conservative Mayor Mickey Straub attempts to oust House Minority Leader Jim Durkin in the 82nd House District's March 20th primary. The person "bankrolling with dirty money" is not mentioned on the flyer, but a Chicago Tribune November 28, 2017 story is vaguely quoted to hint at just who that person is. The story is written by Chicago Tribune's political reporter Rick Pearson's story about conservative political donor Dick Uihlein, who contributed to the political action committee that supported Alabama U.S. Senate candidate Roy Moore in last month's special election.  Moore was accused of sexually assaulting teenage girls 30 years ago.

And that is how the IL GOP mailer is tying Mayor Mickey Straub to a political action committee headed by Dan Proft, generously funded by conservative Dick Uihlein, who also wrote a check to a pac that contributed to Judge Roy Moore's campaign.

Thus, the IL GOP mailer concludes, Mickey Straub is wrong for "our families," and wrong "for Illinois."

Already, the Burr Ridge Village Board called for an apology for the Durkin campaign accusing the board for inappropriate fund appropriations.

The campaign – the latest chapter in a longtime bitter feud between Jim Durkin and Dan Proft – is sure to get nastier.