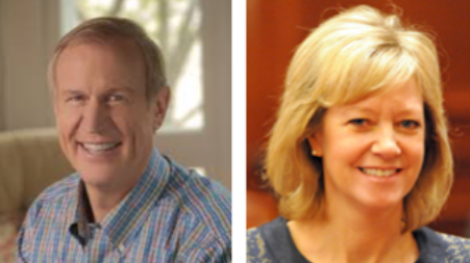 CHICAGO – The Ives' campaign's controversial "Thanks, Governor Rauner" ad continues to stir discussion among political devotees – and insiders say the Ives campaign is betting the kerfuffle will raise the state rep's name recognition among Illinois conservatives – what may be Ives' biggest obstacle heading into the March 20th IL GOP primary.

Polling is showing Ives' lack of name recognition may be keeping her from climbing in IL GOP polling. The "Thanks Governor Rauner" ad is intended to draw attention to the Governor's challenger in the IL GOP primary. The Rauner camp is implementing an "ignore her" strategy by focusing on the Democrat he expects to face in the November 2018 General Election.

Often saying she's heading a "Revolution," over the weekend Ives told a Facebook critic that the ad paid for by her campaign "doesn't attack people, it tackles issues." She said it also shows that the governor is showing his preference of constituencies – while excluding others, like the IL GOP conservative base.

Lori Ryan-Connelly You missed the mark with that ad. Honestly, Jeanne you’re smarter and have more to offer than that. You should fire your campaign advisor for letting that horrible ad see the light of day. Who’s vote are you trying to garner with an ad like that? I traditionally vote democratic and I am looking for someone who is going to solve the state’s fiscal problems not someone who is going to pander to the extremes. If you had stuck to your strengths- such as your legislative experience, accomplishments, and your possible solutions, you would have won over moderate Republican voters and Democratic voters like myself- which is what you need to not only to beat Rauner in the primary but to go on to beat whoever is the Democratic candidate in the election. I’m disappointed.

Ives admitted the ad was "provocative," and intended to characterize the governor's "extreme" issue positions.

Jeanne Ives So what the commercial that is generating the expected hysteria from the expected quarters attempted to do, admittedly provocatively, was to properly and truthfully characterize the extreme issue positions Rauner took and their implications.

The commercial does not attack people, it tackles issues by truthfully illustrating the constituencies Rauner has chosen to serve to the exclusion of others.
Rauner chose Exelon fat cats over taxpayers.
Rauner chose Rahm and CPS schools over suburban and downstate schools.
Rauner chose Planned Parenthood and Personal PAC over pro-lifers or even simply over abiding the spirit of the Hyde Amendment which remains in force at the federal level.
And Rauner chose the political agenda of the LGBTQ movement over the privacy interests of moms and dads who don’t want their daughters forced to be in the same bathrooms and locker rooms as men.

This is a real issue being litigated in Palatine school district 211 and across the country. Last month, a Wisconsin school district agreed to pay a transgender student $800,000 to settle a lawsuit she filed in a successful attempt to share bathrooms and overnight sleeping quarters with male high school students.
There was a story in the New York Post over the weekend about a father-daughter dance at a Staten Island elementary school being cancelled because it offended the trans rights community.
I’m sorry. But, as the mother of a daughter in elementary, school, my husband Paul and I are not on board for this.

Ives' ignored calls to take down the ad from IL GOP Chairman Tim Schneider and three other candidates running for statewide office. Governor Rauner did not release a formal statement, but told one reporter the ad shows Rep. Ives is not qualified to be governor.