Di Leo: Judging a Book by its Cover is More Dangerous than Ever 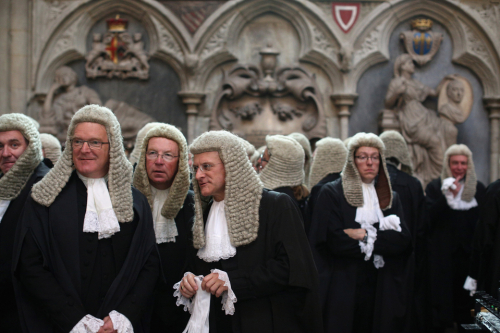 Reflections on Jeff Sessions and our "Anglo-American" legal system…

Among the first truisms we learn as children is the old saying “Don’t judge a book by its cover.” Good advice, any way you look at it.  Antique dealers, realtors, food critics, and a thousand other professions will attest to the fact that the contents are often either much better or much worse than a product’s first appearance.

The newspaper business, however, was supposed to be an exception to this rule. Traditionally, a headline was a pull quote or summary statement about one of the key elements in an article, so a headline should give the reader a good idea of what its article would be about.

In the age of media bias, unfortunately, this is no longer true.

Speaking to the National Sheriffs Association on February 12, Attorney General Jeff Sessions mentioned that "since our founding, the independently elected sheriff has been the people's protector who keeps law enforcement close to and accountable to people through the election process. The office of sheriff is a critical part of the Anglo-American heritage of law enforcement."

Now, on first glance, anyone who follows politics knows that this is, on its most basic level, a standard compliment to one’s audience by a politician. Whether you’re speaking to an audience of doctors, teachers, engineers or entrepreneurs, you always try to compliment them as a group.  Whatever your political differences may be, you mention that you respect their career choice as important to society.  On that level, there’s nothing in the statement that anyone could argue with.

To study the content a bit, one can find a bit more depth that is indeed worth considering. Most countries – even those that elect their representatives – don’t elect people in law enforcement.  Police commissioners and carabinieri are normally appointed by other elected officials, like mayors and governors.  But we in the United States elect county sheriffs directly, a conscious choice that shows the (small r) republican nature of our system.  We want our sheriffs to owe their offices to the voters they serve.

To provide further detail, AG Sessions mentioned the roots of our system in the “Anglo-American heritage of law enforcement.”

Again, anyone with the slightest knowledge of history or the law understands exactly what he was referring to: the fact that the American political system is, at its heart, a product of the Enlightenment, and a continuation of the then-500-year-long human rights process that had been practiced in England. Our Founding Fathers recognized that England had progressed from a hereditary dictatorship – the unlimited powers of the Norman King William the Conqueror – to a parliamentary republic and limited monarchy – with the far more limited powers of the Hanoverian King George III.

And our Founding Fathers, recognizing that this progress had been slowed, intended to continue upon the path on this side of The Pond, through our War of Independence and our Constitution.

Our Founding Fathers borrowed liberally from the English system, and improved upon it. They utilized English Common Law, essentially grandfathering in the laws of England until new American laws and judicial rulings addressed issues.

In short, our current legal system – both in our laws and in our law enforcement – is a combination, and a continuation, of hard-won English innovations. From the Magna Carta to the Petition of Right and beyond, the freedom of the individual citizen from the caprice of omnipotent rulers has been an 800-year-long progression, wholly English and American – codified as “Anglo-American” – in nature.

There is naturally nothing racist or bigoted in such a reference. It is a recognition of history, an appreciation for the great advances on this earth by many great thinkers who have long since left it.

In speaking of our Anglo-American legal heritage, we tip our hat to Mason and Marshall, and to Madison, Hamilton and Jay… and to Blackstone and Bentham… even Richard de Clare and Archbishop Langton.  Our legal heritage goes back eight hundred years. It is a heritage to be proud of.

Compare the Anglo-American system with the medieval systems that preceded it: who would choose trial by fire or trial by water, over our practices of trial by a jury of our peers? We have the right to obtain counsel who is expert in the laws under which we are charged; we have options for recourse through appeals to higher courts.

We don’t have to go back a thousand years to find weaker alternatives though. We can go back three thousand, and compare against Hammurabi and Leviticus (even those of us who today champion their sentencing approach will hardly support their shoddy protections against false convictions).

Or just look at the rest of the world today, and we’ll see people held without trial or even charge for years, for decades, because of the omnipotence of their rulers, and a lack of such protection for the citizens such as our forefathers earned for us, at the point of a sword, through eight hundred years of political and often revolutionary activism.

Are you familiar with the Napoleonic Code of Justice? It was an immense improvement over what came before, but if you’re ever accused of a crime in a country settled by the French, be careful what you tell your lawyer; what we think of as attorney-client privilege is turned on its head by the French system.

There is simply no question: no matter whether you are rich or poor, black or white, young or old, a Mayflower descendent or one with much more recent roots… the Anglo-American system is good for you… the best legal system in the world, particularly for a minority, because of the countless protections that our system provides.

Now, back to AG Sessions.

As soon as he made his remarks, the anti-American Left pounced on them. “ANGLO-AMERICAN!” they screamed… “How Dare He!”

Social media was quickly filled with self-identified experts in such detailed studies as “feeling offended,” and “assigning intent” and of course, the ever-popular talent, “mind reading.”

The Left declared that his citation of our Anglo-American legal heritage was insulting to minorities, in fact, to everyone on earth except White America, whatever that means.

Now, this posed a challenge for the mainstream media. Reporters who knew exactly what Jeff Sessions meant couldn’t lie about it, just to score points against a Republican, could they?  Especially when they remembered that a good percentage of their readers – maybe even a majority – would know exactly what was going on.

So in press coverage in the days that followed, we saw an interesting process develop in our news coverage, one that has become all too common in modern America.

1: A conservative says something undeniably accurate and inoffensive.

2: The Left calls it out as mean-spirited and bigoted, without grounds.

3: The press reports both sides as if both the truth and the lie were of equal merit… and

4: The headline writer gives the impression that the article supports the Left’s false charge.

Consider the Tampa Bay Times’ article on the matter. Their headline read “Florida sheriff: Jeff Sessions’ Anglo-American comments ‘divisive’”… while the article itself quoted sources including professors and sheriffs denouncing the accusation and explaining the harmlessness and inoffensiveness of the remarks.

USA Today titled their piece “Jeff Sessions Slammed for Anglo-American Heritage Comments.” But what did they admit in the article itself?  That “as most law students learn in the first week of their first year, American law, also known as the Common Law, is a shared legal heritage between England and America.  Their defense checks out. In fact, even then-Senator Barack Obama has been cited as referring to our justice system as ‘the Anglo-American legal system’ in a speech from 2006.”

Again and again, as we read through the coverage of this alleged faux pas this week, we find that the columnists and reporters had no choice but to admit the truth: that there was nothing racist about Jeff Sessions’ remarks whatsoever.

But you’d never know it from the headlines. The articles start out touting the liberal line, as promised in the headlines, and then only as one gets a quarter of the way in, or halfway, or even later, does one discover the truth: that the Left’s accusation is both wrong and unjustifiable… that this isn’t a statement that could be taken either way, but can in fact only be taken one way… and the Left is making up a slight entirely for political purposes.

Can we blame voters for making poor choices on election day, if they have diligently paid attention to the news, as they were instructed in their childhood, never dreaming that such news was more spin than truth? Can we blame minorities for thinking the worst of people in the majority, when they have heard nothing but the claim that whites are bigoted against them, and they’ve been shown “proof” of it on a daily basis?  They may have no way to tell that such “proofs” were utter fraud.

Our culture has sunken low, very low, from the days when valiant libertarians risked their lives, their fortunes, and their sacred honor on a quest to design a nation of laws, a nation in which men and women could live and prosper, free of oppressive government.

We have fallen far indeed. But we haven’t just fallen, we’ve been pushed.   And tragically, for decades now, but never so much as in recent months, the vaunted “free press” has done a good deal of the pushing.

John F. Di Leo is a Chicagoland based trade compliance and transportation professional, writer and actor. Permission is hereby granted to forward freely, provided the IR URL and byline are included.

By Illinois ReviewIn another blow to Illinois Gov. JB...
Previous article
Democrat Governors Association: Rauner drove Illinois’ finances into the ground; makes middle class pay
Next article
Thorner: Can Trump bring jobs back to US, or will labor shortages block the dream?