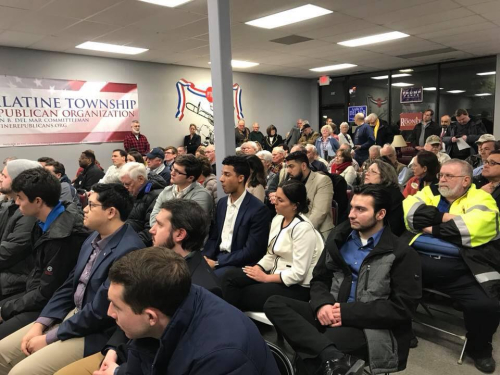 PALATINE – During the 2016 presidential primaries, the cry among Democrats was Hillary Clinton "rigged" the procedures to win the party's nomination over Bernie Sanders. As more and more comes out about how high-ranking FBI insiders allegedly worked with the Department of Justice, the State Department and possibly even President Obama to spy on Trump campaign insiders, the phrase "attempted rigging" comes to mind.

The PTRO Chairman is Aaron Del Mar, former Cook County Republican Party chairman. Del Mar Is Palatine Township's Highway Commissioner and was appointed last month by Governor Rauner to serve on the Illinois International Port District Board of Directors (although he is yet to be listed on the District's website).

Del Mar and Cook County GOP Chairman Sean Morrison both endorsed Rauner in 2014, and claimed their endorsements won the primary for Rauner.

Accusations of inappropriate vote maneuvering hit Facebook Tuesday night when those attending began reporting what went on at the meeting.

"Rules were requested for this meeting. Committeeman Del Mar responded that he was not obligated to provide them and he can run the organization any way he feels," committeeman Vicki Gwozdz Wilson wrote on the group's FB page. "He told people tonight that if they didn’t like it they could leave. He is an absolute dictator and Republicans who believe in transparency and ethical behavior need to demand the 'data' behind tonight." "Del Mar ran a sham endorsement session on numerous levels," Wilson – an Ives supporter – wrote. "This endorsement is completely meaningless. As the straw poll at the Christmas party and the standup vote tonight showed, the majority of Palatine Township Republicans endorse Jeanne Ives."

Julie Tragas, another person that attending the endorsement session said, " … [W]hen I insisted on putting my ballot in the ballot box at the start of the evening, there was already a stack of ballots in there. This has been rigged.

"Unlike normal elections where the voters insert their ballots in the ballot box themselves, he was placing them in the box probably to keep others from seeing what I did. Disgraceful," Tragas wrote before the organization publicized its final results. "If this was a legitimate endorsement session there would have been transparency but there was none. My prediction is that Rauner will get the endorsement because Del Mar owes him- he's been bought and paid for in my opinion."

Jennifer Zold, another meeting attendee, wrote there were dozens of outbursts of protest and probing questions – "much in disbelief!"

"The weighting system of votes was among the most egregious of the covert manipulative tactics," Zold wrote. "When Del Mar was asked, 'Well who decides that?!' He proudly told the room of nearly 80, 'ME.'"

As the news of the evening's proceedings spread, Mark Cramer, Precinct Captain in the Schaumburg Township Republican Organization and a retired Navy Commander, expressed dismay with the situation.

Illinois Review has asked Chairman Del Mar for a comment concerning the accusations being publicly made by members of his organization. We will report as soon as we hear back.

UPDATE: Chairman Del Mar did respond and his response has been published in its entirety HERE.