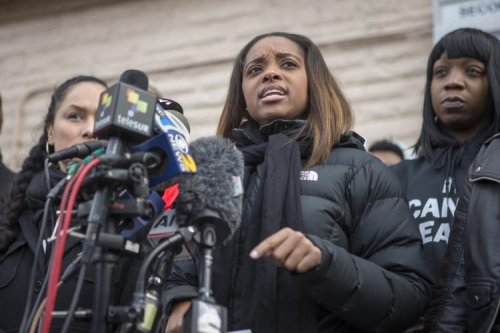 CHICAGO – It cost between $20 and $100 to hear Nation of Islam's Louis Farrakhan annual speech denouncing "Satanic Jews" and other anti-Semitic rants at the Chicago WinTrust Arena last month. One person – a Women's March and Black Lives Matter leader – Tamika Mallory is being reprimanded by associates for attending Savior's Day with the Nation of Islam.

Planned Parenthood of the Northwest disinvited Mallory from keynoting their spring fundraiser next month, they said Friday.

Mallory says she's been going to the Nation of Islam's Savior's Day meetings for decades, so the criticism of her attendance was unexpected. In the news source NewsOne, she wrote:

I didn’t expect my presence at Saviour’s Day to lead anyone to question my beliefs, especially considering that I have been going to this event regularly for over 30 years. I first went with my parents when I was just a little girl, and would begin attending on my own after my son’s father was murdered nearly 17 years ago. In that most difficult period of my life, it was the women of the Nation of Islam who supported me and I have always held them close to my heart for that reason.

It was all about unity and gathering with like-minded people to build coalitions, she said.

Rebecca Burgess Blackburn I think it would be prudent, at this point, for you to either denounce Louis Farrakhan or step aside as one of the leaders of the group. The dissection of people in the movement by race, sexual orientation, and religion simply isn’t going to work. I’m disappointed but I realize you’re a new, young leader. There is a chance to correct this if you act very soon. I really hope you do the right thing. Trust me, we believe in you.

Farrakhan and Nation of Islam officials have been accused of repeatedly using anti-Semitic and homophobic rhetoric.

A photo of Barack Obama and Louis Farrakhan together in Chicago was found and released recently: