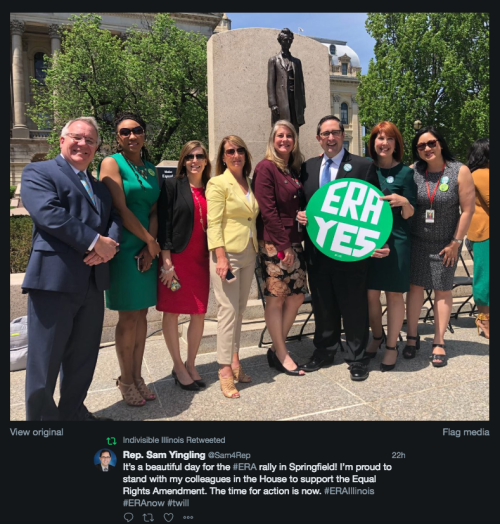 SPRINGFIELD – Leftist groups such as "Indivisible Illinois" are on hand Wednesday at the State Capitol, pushing for Illinois to become the 37th state to add the Equal Rights Amendment to the U.S. Constitution. For decades, the ERA has been stuck at 35 states, needing 38 for ratification. Last March, Nevada became the 36th state.

While the US Constitution specifies efforts to amend the Constitution must last only seven years, proponents expect the deadline to be extended.

The Illinois Senate passed the ERA this spring, with the help of Republicans – who betrayed Republicans' historically being opposed to the effort.

In the Illinois House, in order to obtain passage, three-fifths will be needed. That means House Republicans will need to support the effort. The ERA proponents have convinced Republican Steve Andersson (R-Geneva) to co-sponsor the effort. Thus far, Andersson the only Republican that has publicly announced his support. The Democrats have 67 votes, so Andersson's one vote leaves the ERA proponents short the needed 71 votes.

Proponents point to the ERA guaranteeing abortion rights and protecting rights based on sex.

Opponents agree the ERA would protect abortion rights, and would cause confusion on public policies that now protect women – such as pregnancy work rules, lactation privileges and other benefits of which only women can take advantage.

Illinois Family Institute and the state's major prolife groups have announced they will not endorse anyone that votes for the ERA this session. Andersson is not running for re-election, but IFI has a list of state reps they consider as shaky on the issue.

IFI is urging calls to lawmakers immediately, because the call for the House vote can happen in Springfield at any time.