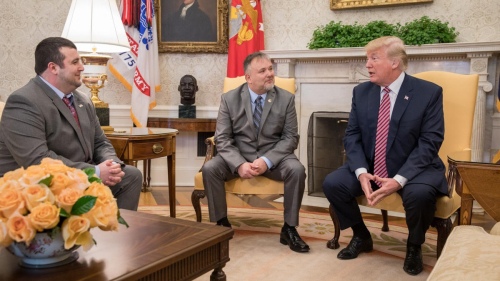 Shane Bouvet, his father and President Trump at the White House in February, 2018

EAST DUNDEE – State Rep. Allen Skillicorn (R-East Dundee) is unhappy with the Sangamon County Republicans who, he says, discouraged a Republican from challenging a Democrat House incumbent in November.

"Do you know Shane Bouvet? If not, you should," Skillicorn asked in statement sent out Thursday. Bouvet met President Trump after the President was moved by Bouvet's story as a Trump campaign volunteer.

"President Trump met with the struggling single father to thank him for his ardent support, and not merely with words, but with a check for $10,000," Skillicorn said.

Skillicorn said Bouvet – an Illinois resident – is "fed up with crony politics." Bouvet wants to drain the swamp of state government that is drowning its citizens in the depths of taxation and regulation, Skillicorn said.

"He is a leading member of the silent majority in our great state bringing new people and new ideas to bear. Not that there aren’t barriers to overcome, even in the Party of the President," Skillicorn said. "Desiring to run against an incumbent Democrat, Bouvet stepped forward, but the Illinois GOP establishment isn’t interested. Well I am."

Skillicorn said he is "proud to stand" with Bouvet and together call upon the Republican establishment to recognize the change that is in their midst.

"It is time to embrace Shane and others like him, such as Mark Shaw for the next Chairman of the Illinois Republicans to lead our Grand Old Party into a new era and Make Illinois Great Again!" Skillicorn said.