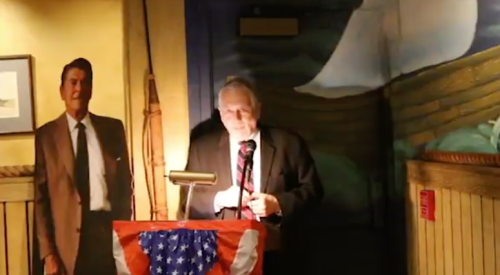 The Republican Assembly of Lake County was host to its 14th Ronald Reagan Dinner held to honor our 40th President.  It is the longest-running Reagan dinner in the U.S.  This year's dinner was held on June 8, 2018, at the Dover Straits Restaurant in Mundelein, Illinois and featured special guest Jeanne Ives and featured speaker of the night, Larry Pratt of Gun Owners of America.

The RALC is a grassroots organization made up of Ronald Reagan conservatives who believe in small government, lower taxes, free market capitalism, strong defense, and the right-to-life.  Read here the RALC Statement of Principles. The organization meets at 7:00 p.m. on the 3rd Thursday of the month at the Fremont Library, 1170 N. Midlothian Road, Mundelein, IL.  Membership is open to all share and promote the principles expressed in the National Republican Platform.

The Republican Assembly of Lake County is an affiliate of the National Federation of Republican Assemblies (NFRA), a grassroots political organization which promotes conservative principles and candidates within the Republican Party.  In December 2001, twenty-two founding members joined together to form the Republican Assembly of Lake County (RALC). Those founding members had a simple unifying goal, to promote and foster the conservative principles and beliefs that represent the Republican Party Platform.  Ray True was elected as its first chairman, serving as Chairman until 2013 when he lost his battle with cancer. Present officers are Chairman, Glenn Garamoni; Treasurer, Mike McKay; Secretary, Mary Biron; and Exec. Director, Bob Cook.

Welcome and Introductory remarks were presented by Glenn Garamoni as to the history and mission of the RALC.  Following the Invocation by Lisa Roti and the “Pledge of Allegiance” by Pete Speer, Bonnie Quirke, President of Lake County Right to Life, introduced the pre-dinner guest speaker, Jeanne Ives.

Bonnie Quirke introduced Jeanne Ives as a "hero of mine" and as an "endangered species in this day and age."  Bonnie praised Ives for voting true to the Republican Platform.  Bonnie could always count on Ives for her Right to Life vote to protect unborn children.

Representative Jeanne Ives initially thanked the RALC for its help in her failed Illinois gubernatorial campaign. It was in December of last year that Jeanne spoke in front of RALC members to pitch her campaign to challenge incumbent governor Rauner in Illinois' March 20, 2018 Primary Election. A West Point graduate, State Representative Jeanne Ives officially announced her run for Governor of Illinois on October 28, 2017 on the Republican ticket at a hometown gathering in Wheaton, Illinois.  Ives received 342,000 votes, almost 48% of the votes.  As Jeanne said: "We fell a little short, but we did send a message of who we are and what we stand for, and we're not going away.  We will keep standing on our principles."

In speaking about the last four weeks of the Illinois' legislative spring session, Jeanne had little optimism for what had happened.  Furthermore, much was revealed about the mindset of Republican legislators.  Eight senators and 10 representatives voted for the Equal Rights Amendment to become the 37th state to ratify the amendment, which has nothing to do about equal pay for women, etc., but instead seeks to create a genderless society.  Additionally, Republican legislators voted for a bad gun bill and a terrible budget.

Despite having a full year spending plan that budgeteers and the governor have said is balanced, S&P Global Ratings called the measure “more of the same” and kept Illinois’ crediting rating the same: A notch above junk status. Illinois taxpayers will begin paying a 4.95 percent individual income rate, up from 3.75 percent, retroactive to July 1, a 32 percent income tax hike.  Governor Rauner is now on a state tour touting the state budget as a balanced one.

As Ives suggested: We know what the Democrats stand for as we watch them destroy the state, but it is not good when Republicans start playing the game to align with the Democrats.  But despite this lack of optimism, Jeanne did express some optimism when she hears about the new candidates who are coming forward to run for elected office.

What cannot be ignored is continuing to disregard the economics of this state year after year until it reaches a point of no return.  No reforms were realized, but instead Illinoisans were saddled with a 32% tax increase.  Illinois could very well go the way of CA, but what is currently happening in CA does offer some hope for Illinois.  In CA people are objecting to its liberal policies, something that has yet to happen here in Illinois, despite its corrupt political culture that must be overcome.

About leadership, Rep. Ives asked, "Where is our Ronald Reagan?', further noting that traits of Reagan or Abe Lincoln aren't present in any of the leadership here in Illinois."  Instead, continued Ives, "sexual harassment claims under Madigan have now become an issue."  As a long-time observer said, the ethic scandal is “a much more serious threat to the Speakers's power” than at any other time.   Democrat Representative Lou Lang  had to resign from his House Leadership position on the same day he managed to garner enough Republican votes for ERA to pass the House.  Said Ives:  "Ms. Garrett and her sexual harassment by Lang tells us much about what Democrats are all about.  This goes way past sexual harassment.  The Democrats have been in power for so long that they think they can do anything."  Ives was a leader in defending Ms. Garrett and called for the resignations of Mike Madigan as his role as Illinois Democrat Party chairman and House Speaker.

Ives sees any glimmer of hope disappearing if we as Republicans don't get their act together.  In that Ives drove 22,000 miles during her campaign for governor and had 3,500 individual donor demands that we must keep the pressure on.

After supper was served and enjoyed (On each table, in honor of Reagan, were miniature Jelly Belly packets for each guest.), Glenn Garamoni introduced the featured speaker of the evening, Larry Pratt, Executive Director Emeritus of Gun Owners of America. GOA represents more than 1.5 million Americans dedicated to promoting their Second Amendment freedom to keep and bear arms, lobbies for the pro-gun position in Washington, D.C., and is involved in firearm issues in the states. Pratt's latest book, "On the Firing Line", was published in 2001.  Having held elective office in the state legislature of Virginia, Pratt now serves as Vice Chairman of the American Institute for Cancer

Larry Pratt's initial remark was well received when he expressed how delighted he was to find so many Republicans so close to Chicago, further adding that taxes do have consequences.  King George also thought his subjects across the ocean were a bottomless pit.

Pratt gave much credit to the Black Robed Regiment for motivating the colonists to go out and fight for independence from England.  The clergy preached fiery sermons from the pulpit which spoke of the evil and wrong being done. Some clergy not only gave fiery sermons but also rode off with the men in their congregations to fight and were thus responsible for a big part of what happened in fighting the Revolutionary War.  As stated by Pratt: "We have a reprieve because of the person now in Washington, D.C. We must be willing to defend liberty at all costs."

Pratt went on to speak about the Battle of Lexington where the American Revolution began on April 19, 1755, and where the world's most powerful army was repelled after the British  attempted to collect guns from colonists.  To British subjects, this was unthinkable that commoners would do this to their King.   Pratt then questioned whether this tradition of self-defense is alive today in this nation, going on to explain how time after time Americans since the American Revolution have risen up to throw off their government.  Militias were able to rise to the occasion, whereas Europeans had the bad habit of only knowing what to do if they had a commander.

Pratt cited the Battle of New Orleans in 1813 and the valor of militia men, as marking the end of our War for Independence, not when some documents were signed as indicated in many of our textbooks.

Pratt then recalled The Battle of Athens of 1946 in East Tennessee as a more recent use of a militia.  Following a stolen election, police who were trying to take away the ballot boxes, were greeted by a militia. The result: police left the boxes with the election favoring the insurgents.

In our time the militia tradition took place in Bunkerville, Nevada, over Ted Bundy's raising and watering of his cattle, when the a militia came to stand with Bundy.  The result:  Federal agents backed down.

As to why this nation is different from 3rd world countries and is still an exceptional nation, we think differently from the rest of the world, “People have arms and the willingness to use them to remind government of its limits as defined in our Constitution.” As to whether the same exists elsewhere, it does, but not as a colonial militia.  Pratt then on to describe how guns were a factor in quelling unrest in the Philippines and in Guatemala.  In Guatemala Communists in the 70's were on the verge of taking over the country.  Unless people were willing to work with the government, the country was threatened to be overrun by the Communists.  Because rifles were given out to men throughout the Guatemala, people had the courage to work with the government because they had arms.

In talking about recent gun laws, Pratt strongly refutes extending background checks at all gun shops and bump stocks, which he called an infringement.  We have a Congress that just doesn't get it, and because We the People don't get it, laws are created which violate our Constitution.  As shown in Broward County, Florida, relying on authority to defend can be "a really shaky reed"  The tragic event also tells us that too many Americans believe government can take care of us.

In closing, Pratt expressed these important thoughts:  "We must talk the talk of liberty to our own elected officials.  We stand at the crossroads here in this nation.  Guns made all the difference through militias early on, and guns remain important to us today."

A period of Questions and Answers followed, in which the following were noted: