Di Leo: The Magna Carta and the Path to Freedom 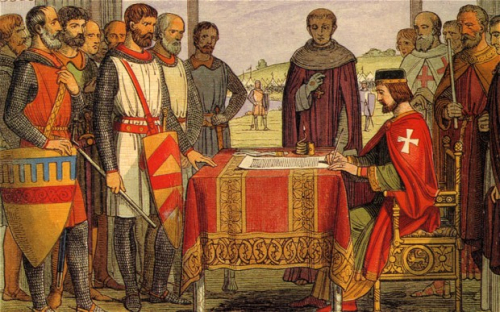 On June 15, 1215 A.D., King John of England affixed his seal to the Magna Carta, and the world was changed.

While England was not yet the dominant power on the world scene that it was to become, England was already a typical major monarchy, and its monarchy behaved as monarchies always had.  The king might not choose to be a tyrant – might not choose to exert his will upon his people in every way, all the time – but he reserved the theoretical right to do so.  It was just what “being a king” meant.

There was certainly a history of freedom in the world, even by that time.  Ancient Rome had been forced to publish the Twelve Tables over a millennium and a half earlier; the Ancient Athenians and some other city-states had practiced versions of republics and democracies in ancient time as well.  But if a nation had a king, well, that king generally considered his powers to be unlimited.

For years, English barons and other nobles had chafed at the bit, as their subjects were conscripted for the Norman kings’ many wars.  It had been a hundred and fifty years since the Conquest, and this lot wasn’t exactly ingratiating themselves with the English nobility.  The nearby wars with France, the distant wars over the Holy Land, the economic disruption, the never-ending taxes… it all added it up to an untenable situation.  The king didn’t have the power to force his will, and the nobles finally rebelled.

The meetings commenced at Runnymede on June 10, and within five days, with the mediating support of the Archbishop of Canterbury, they had a Great Charter for the king to sign.

Haters today enjoy diminishing the importance of this “Magna Carta.”  They point out that it didn’t secure the rights of all individuals, just the nobility.  They point out that it didn’t last forever, unadulterated, but it was just a combination of permanent and temporary wins, in a long, slow progression over the centuries.  And they love pointing out that it could be overridden by kings with more powerful demeanors; when a bully arose in the royal bloodline, he tended to overreach his rights.

But it is always dangerous to view history – judgmentally – from the perspective of today’s zeitgeist.  We must look at historical events in the context of their own times, and judge whether or not those events were helpful or unhelpful, in the long run, on the path to liberty.

The Magna Carta limited King John’s ability to run roughshod over the rights of his nobles.  Instead of English royalty being viewed as unlimited in power, the royals now had to admit that they possessed only the powers of a limited monarchy.  As much as they may push and pull to redefine those limits, the importance of admitting that limits to their power existed at all was a historic victory.

More rights – and the rights of the people – would follow, slowly, hard-won time and time again over the years.  The Peasants’ Revolt of 1381, the Petition of Right in 1628, the Glorious Revolution of 1688, and so many more incidents, big and small, were steps on this journey.  Some involved aspects of religious bigotry, some reinforced the subjection of some by supporting the rights of others.  Not every step in the journey would be viewed today as a libertarian move.

When nobles were empowered vis-a-vis the king, that may have done nothing substantial for the freeman living under them.  Whether a freeman or serf gets his marching orders from a king or from a king’s vassal may not make much of a difference to that individual.

But viewed in the long run, we see a march toward the Enlightenment.  As we review this timeline, we see a Norman Conquest in 1066 establishing a powerful, warrior monarchy in England, and a Magna Carta in 1215 finally beginning to draw it back.

The Magna Carta paved the way for the rights that England cherished centuries later.  Rights to a fair trial and bans on illegal imprisonment, limits to taxation, the rights of churches (if not outright religious freedom), all began under English law with this innovative document.

And it had teeth, too: if a king overreached, the nobles could seize the king’s castles and lands, and force him back into obedience.   Whether such teeth turned out to be practical in the future or not, the king’s accession to these demands at Runnymeade was itself a huge victory for the rights of the English people, just as we today have never successfully tossed out a president through our impeachment power, but the fear of it happening has constrained many a U.S. president who might otherwise have gone even further in abuse of his office.

The Magna Carta wasn’t the be-all and end-all of the quest for liberty.  But for the people of England, it was the beginning.  And the road of a thousand miles must begin with that first step.

There is a reason so many of our own Founding Fathers were reluctant to rebel against their mother country in the 1770s.  Even though they knew that George III was overstepping his bounds, being downright tyrannical in some ways (particularly in New England), they had great difficulty letting go of the traditions of English limited government, the traditions that had led to the Enlightenment, the traditions that began at Runnymeade, five and a half centuries earlier.

And when we ask the question of whether or not it really mattered – whether the Magna Carta was truly the milestone that some celebrate and others stubbornly deny – we can take a hint from a view of the English monarchy themselves, in their personal lives.  If you ever wonder how the British Royal family feels about King John putting his seal on the document that forever acknowledged that their powers were limited, consider this:

Since the signing of the Magna Carta in 1215, the British have changed royal houses numerous times.  These royal families have been naming their sons – their future kings – for eight hundred years.  There have been six Georges, eight Edwards, four Williams, eight Henrys…

But there has never been another King John.

John F. Di Leo is a Chicagoland based trade compliance trainer, writer and actor.  A former political activist and minor party official, he has been a recovering politician now for twenty years (but, like any addiction, one is never truly cured).   Permission is hereby granted to forward freely, provided it is uncut and the IR URL and byline are included.