CHICAGO – A brouhaha over the conservative organization Turning Point USA's leadership becoming so entwined with the Trump Administration has led to radio talk show host former Congressman Joe Walsh resigning from the group's advisory board.

"I've been on TPUSA's board of advisors from the very beginning. I've been a speaker from the very beginning," Walsh told Illinois Review Wednesday. "I love Charlie and I love the organization. The problem is it's a non-partisan, non-political organization that is all about the issues – limited government and free markets. TPUSA should never be tied to any politician, whether that politician is Donald Trump or Ronald Reagan."

Walsh and his wife Helene discussed their views publicly on Facebook earlier this week: 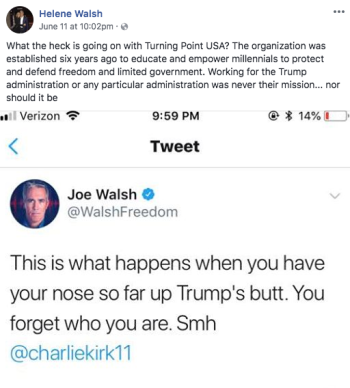 Walsh's comments were in response to political analyst and pollster Frank Luntz, who pointed out Kirk's comments when President Barack Obama's administration was negotiating with the North Koreans: "I will be removing myself from the board, and I probably won't be invited to speak at TPUSA events," Walsh said.  "It's not about a politician – when Trump does wrong, you've got to criticize him."

Kirk is so close to Trump, he can no longer criticize the president, Walsh said.

Kirk did not respond to Illinois Review's query. He is often featured on Fox News and has over 450,000 Twitter followers.

By Illinois ReviewIllinois House Democrats maintain a comfortable supermajority...
Previous article
As California considers dividing into 3 states, could Illinois consider dividing, too?
Next article
The Good Society: The Person at the Center of the Economy