Di Leo: George Washington: Inspiration in the Face of Danger 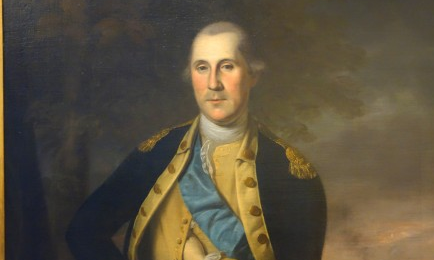 At the end of March, 1776, following the year-long Siege of Boston, General George Washington and the Continental Army drove the British out of Boston, following their stunning victory in the Battle of Dorchester Heights, one of the true masterstrokes of the War of Independence.

But the British just went to Halifax to regroup, and to gather reinforcements for a real assault, to follow that summer.  In June, the expected redeployment of British troops began, as his forces headed south, bound for New York, to meet with other reinforcements he had called for.

General Washington knew what was coming. In the spring, he determined that the big redcoat assault was sure to be at New York City.  Washington knew two things about New York: it was absolutely indefensible except by a naval power, and, whatever we may have been, we were not a naval power.  Holding New York was a hopeless cause.  But they didn’t believe they could give it up; it would be too critical as a base of operations for the British.  So he directed General Charles Lee to develop a plan for holding it, and began to put Lee’s plan in motion.

In Philadelphia, at what we now know as Independence Hall, the Continental Congress spent July 2 debating the final edits to the Declaration of Independence, and by the end of the debate, they were able to come to a unanimous vote to issue the Declaration and thus publicly announce our separation from the Crown, following months of reticence about daring this step.  We are forever grateful to them for showing such courage on behalf of their country.

But as the delegates argued philosophy behind the closed doors of a sweltering meeting room in Philadelphia, George Washington and his troops were outdoors, 90 miles to the northeast, hard at work, assembling the various elements of Charles Lee’s plan for the defense of New York.  It was a good plan, making the most use of whatever cover was available, with an orderly design to make every fallback relatively safe for the Americans and as costly as possible for the British.  It could actually have worked.

But on July 2, following months of American redeployment and planning, the men looked up, and watched as the British began to arrive, in numbers few had anticipated.

This wasn’t just the Howe Brothers, moving back with the troops who had been evacuated from Boston.  It wasn’t even just those troops plus some reinforcements from Canada.

No, the British began arriving in New York in strength on July 2. As the massive ships sailed through the narrows between Staten Island and Long Island, they began emptying thousands and thousands of men onto the island group we know as New York.  10,000 troops in those first days.

Even that might have been manageable; Washington had about 19,000, though ours were largely rookies, low on weapons, ammunition, and other equipment.  But we were at home, and could theoretically get replenishments more easily than could the British, stuck on the wrong side of an ocean.  It wasn’t time to panic yet.

It soon became clear, however, as the mammoth ships kept on coming, that the 10,000 landing on July 2 would not be end of it.  The British had called all their available forces to meet at New York.  Another 15,000 at least, calling up their regulars from the Carolina campaign, and then adding Hessian mercenaries as well. The Hanoverian George III was taking every advantage of his German roots, putting as many Germans into the American campaign as he could, perhaps rightly thinking they would have less compunction about fighting “fellow English subjects” than English soldiers would.

In the end, the New York campaign was to pit 23,000 largely inexperienced and ill-equipped Americans against 32,000 professional redcoats and Hessians, with ships, cannons, muskets and ammunition beyond measure.

But on July 2, when Congress took their vote in Philadelphia, this intelligence hadn’t yet come in from New York.  They had an idea what was in store for them, but only an idea.

The Continental Army, on the other hand, was in the thick of it; watching the massive ships come over the horizon, portending doom and destruction to anyone who would dare to fight back against the mighty British Empire, the greatest military power on earth at that time.

Still the Continental Army stayed at work, as instructed, going over their plans again and again, hoping that the waterborne parade of enemy arrivals would eventually come to an end.  By the end of the day, it must have begun to look like an enemy cornucopia, as the horizon spilled forth unlimited shiploads of enemy soldiers.

When word came of Congress’ action, with a copy of the Declaration arriving by messenger, General Washington ordered that it be read to the troops for inspiration, word for word.  Every line reminded them of why they were there, why they were prepared to fight, why the time had come to sever the ties with England. Jefferson’s pen, the committee’s improvements, and the full Congress’ edits had accomplished their goal, in setting forth both the reasons necessitating our separation and committing in writing our new nation’s values and commitment to individual Liberty.

But even before the Declaration arrived, bearing the printing date of July 4 that is forever enshrined in our history and our hearts, General Washington had written a declaration of sorts himself, independently of Congress, on that same day.

As the Howe Brothers’ countless ships were arriving from Nova Scotia, the Carolinas, England, and Hanover, General Washington knew his troops would need inspiration to get through the shock of the days and weeks to come.  Before the enemy even began arriving, General Washington wrote the following in his General Orders for the morning of July 2, 1776:

The time is now near at hand which must probably determine, whether Americans are to be, Freemen, or Slaves; whether they are to have any property they can call their own; whether their Houses, and Farms, are to be pillaged and destroyed, and they consigned to a State of Wretchedness from which no human efforts will probably deliver them.

The fate of unborn Millions will now depend, under God, on the Courage and Conduct of this army—Our cruel and unrelenting Enemy leaves us no choice but a brave resistance, or the most abject submission; this is all we can expect—We have therefore to resolve to conquer or die: Our own Country’s Honor, all call upon us for a vigorous and manly exertion, and if we now shamefully fail, we shall become infamous to the whole world—

Let us therefore rely upon the goodness of the Cause, and the aid of the Supreme Being, in whose hands Victory is, to animate and encourage us to great and noble Actions—The Eyes of all our Countrymen are now upon us, and we shall have their blessings, and praises, if happily we are the instruments of saving them from the Tyranny meditated against them. Let us therefore animate and encourage each other, and shew the whole world, that a Freeman contending for Liberty on his own ground is superior to any slavish mercenary on earth.

In our history books, we associate General Washington with the war, and we associate other politicians – Adams, Franklin, Jefferson, Sherman, etc. – with the philosophy of independence.  But that’s an incorrect distinction.

Many of our key soldiers had been leaders in the political effort before war broke out; their military ability just drove them to leave the pen for the sword when the time came.  Young Alexander Hamilton, for example, was firing off broadsides at loyalists in the local newspapers while still in college; Generals Philip Schuyler and Richard Montgomery fought in the New York state legislature until being commissioned generals in 1775.

And in this too, George Washington was one of the best examples of the citizen-soldier.  Throughout his long retirement from military affairs, he served in Virginia’s House of Burgesses and served as a delegate to the Continental Congress.  Washington was a leader in the political battles with England over the undelivered pensions and land that had been promised to his troops in the Seven Years War… he was a leader in the coastwide boycott against England at the end of the 1760s… he had been advocating for greater degrees of independence throughout his entire political career.

And in his General Orders for the day that the British began their invasion, the very day that the Continental Congress voted for our Declaration of Independence, Washington knew what his troops needed to hear, and none could put it as well or as succinctly as the General:

“Let us therefore animate and encourage each other, and shew the whole world, that a Freeman contending for Liberty on his own ground is superior to any slavish mercenary on earth.”

It is a message as valid today as it was then. With nuclear and near-nuclear rogue states like North Korea and Iran, with communist conquests and islamofascist terror destroying nations from Venezuela to Sudan, spilling over to threaten our allies all over the world, it is critical that we remember the core philosophy of Liberty that makes these United States a beacon of light for the world, a special City on a Hill.

On Independence Day, we recall the legacy of liberty given to us by our Founding Fathers, and we must strive to take it every bit as seriously as they did, for it is indeed a legacy for which those brave visionaries pledged their lives, their fortunes, and their sacred honor.

We must never let a day go by without thanking Divine Providence for giving the world these men, at that time, to set in motion the events that brought about these United States of America, the greatest nation on God’s green earth.

John F. Di Leo is a Chicagoland-based Customs broker and trade compliance trainer, actor and writer. Permission is hereby granted to forward freely, provided it is uncut and the IR URL and byline are included.