Thorner & O’Neil: Open Borders Pose Threat to US Constitution and Way of Life 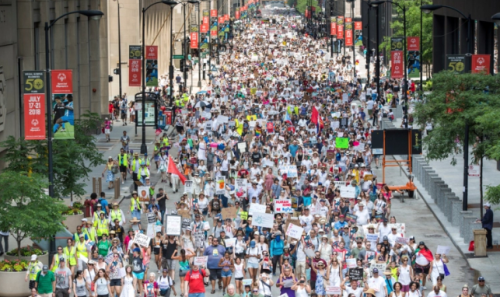 Giddy with excitement, Democrat activists finally found an issue to attack President Trump that resonated with the public: separating children from parents who were attempting to illegally enter our country from the Mexican border. Media sources favorable to Democrats and who appear at war with our President joined in the excitement by making the border situation appear as if our President and America’s border agents are heartless.

The public was invited to believe a baby was ripped from his or her mother's breast by a border agent.  A Telegraph News headline stated: "Children separated from parents at US border were held in cages in Texas warehouse.”  Vox, a Leftist media source had this headline: “It’s not just cruel to separate a breastfeeding baby from a mom; It’s medically dangerous.” All these comments were designed to incite the public against our President and border control agencies.

If there was such an incident, it is odd that no attempt was made to attain a statement from the alleged heartless agent in question, but absolutely no evidence has been presented suggesting this to be a common practice. If the intent was to gain sympathy for aliens who blatantly disregard our laws, to excuse foreigners who jeopardize their own children by taking them on a dangerous trip full of uncertainties, or to use biased reporting as a way to malign our new President and his people, it did serve its intended purpose.

Had the reporters and news sources done a basic check, they would have discovered DHS does not have a blanket policy of separating families at the border.  DHS does however have a responsibility to protect all minors in its custody.  This means DHS will separate adults and minors when DHS has one or more of the following reasons to question the claimed familial relationship between an adult and children.

In recent months, DHS has seen a staggering increase in the number of illegal aliens using children to pose as family units gain entrance into the United States. From October 2017 to February 2018, there was a 315 percent increase in the number of adults with minors fraudulently posing as “family units.” It would be irresponsible not to take this issue seriously to protect potential victims.  It is untenable that we can't trust the media to provide facts rather than fiction.

It is also unforgivable that media sources rarely mentioned that most current practices at the border are the result of decisions initiated and practiced by the Obama administration.  The Trump administration is simply doing what it is constitutionally charged to do—enforce existing laws established by President Obama.  President Trump issued an executive order that directed the Department of Homeland Security to keep illegal alien families together “to the extent permitted by law.”  Most media sources published that fact … but days later and without any front page headlines.  President Trump has every reason to accuse mainstream media sources of blatant bias against him and his administration.  Hopefully Trump realizes that Democrats don't want tough and fair immigration laws but instead are pushing for open borders.

It is refreshing that a few unbiased sources remain that do report important information to explain the logistics of what happens when a massive number of illegals arrive together.  Without a doubt such a situation stretches border resources. In that reporters purposely seek out those in their reporting who are willing to make negative comments about immigration agents is unprofessional and unfair.  This practice would only have merit if an investigation proved it was a common practice and harmful to the detainees.

Americans are becoming increasingly suspicious of media sources because biased reporting has become all too common.  The Washington Post reported how 2,500 children were separated from their parents in the last few months.  While this information is factual, what the article neglected to explain, and the public deserved to know, is that it's the responsibility of our border agents to determine if all 2,500 children were brought by their real parents or if some might have been trafficked.  Qualified border agents are trained to determine which situation exists.  They are doing their best to make the right decisions as quickly as possible, but when massive numbers cross together, it becomes far more difficult and time consuming to do their jobs.  False reporting is not only troubling, but it also serves as an insult to dedicated border agents.

Public Furor does exist and rightfully so.  Instead of abiding by our established immigration rules, those arriving at our southern border have no qualms about jumping ahead of applicants who choose to obey our laws.  And why are those attempting illegal entry so brazen in their efforts?  It is because the loopholes in our immigration system let them get away with it; we do not turn them away.   We process them and allow them entry.  Most of them fail to show up for their court hearings and go their merry way, thus cheating those who obey and follow our legal immigration procedures.  The message has been conveyed that if you arrive at the border you will likely gain entrance into this nation, which only invites countless others to follow those who already have achieved success.  This flaunting of established immigration law, in turn, create tension and problems for everyone, which resulted in the thousands of misguided demonstrators who, on Saturday, June 30, 2018, marched in cities and towns across the nation protesting the Trump administration and the hard-working agents at the border crossing, all of whom are doing their best to cope with problems another administration created.

Donald Trump won the presidency largely due to his promise to “build the wall.”  That this message resonated with most Americans is a strong indication most of us want our immigration laws to be strictly enforced. The sinking of the Titanic demonstrated life boats could not save everyone.  Most Americans do understand the United States cannot save everyone by allowing the poor and oppressed around the World unlimited entry into this nation by invading our southern border.  We are a generous people, but understand it is impossible to accommodate everyone who would rather live in America than the country of their origin. That is why we set standards and limitations and laws that must be respected by everyone.

The election of Donald Trump pulled back the curtain and revealed how far to the left most of our media and politicians have drifted.  Liberal Democrats in Congress, renegade Republican members, Hollywood, and a liberal media — acting as an extension of the Democratic Party — are trying to stop our President from fulfilling the promises he made to the public.

Will their most current attack at the border succeed where others have all failed?  Will many Americans continue to be fooled into thinking our President condones border agents ripping babies from their mother’s breasts?  Will the same American citizens think our border agents are heartless people, or will Americans see the hypocrisy of the Left and the degree their accomplices in the media will go to destroy President Trump?

The lack of civility, the constant vicious attacks against our President, and the unprecedented, biased media sources has not so far shaken the resolve of either Donald Trump or those who support him.  We know we elected the right person to be our leader, one who will not cave under pressure or be deterred from the promises he made to the American people.

Keeping this nation as a free and sovereign nation

The upcoming mid-term election could be the most important election in our lifetime.  It could determine which political party controls the House.  If Democrats win control, not only will they do their best to impeach President Trump, but Socialism and globalism will likely be in this nation’s future, which could result in the loss of our cherished Constitution and the freedoms it grants us.

If you doubt this warning, consider the platform of the Democratic Socialists of America whose candidate, Alexandria Ocasio-Cortez, recently defeated the fourth most powerful Democrat in the House of Representative, Rep. Joe Crowley.  This Socialist organization wants to abolish ICE and many of the pillars of a successful civilization.  In keeping with Leftist activism, targeting ICE is a facade for promoting a communist revolution.

Of concern is how Socialism now defines the leanings of many who are aligned with the Democrat Party.  Striking is that according to a poll taken in November of 2017, millennials would rather live in a Socialist of Communist nation than under Capitalism.  It is also reasonable to assume that illegal immigrants with or without amnesty (million of them already vote without consequence) will vote Democrat to be the beneficiaries of all goodies that come their way on behalf of the Democrat Party.

If Democrats succeed and Socialism becomes the norm in this nation, an attempt will be made to abolish everything our forefathers fought and died for to give us.  Socialism has been the downfall of many once great countries.  We cannot allow Socialism to be implemented here in America.

America cannot support or save the entire world’s population.  Maintaining our language, customs, and border are so important to our way of life and for the survival of our Constitution with the freedoms it affords us. There are many who do not realize how close we are to losing our nation and its culture if the influx of Illegal immigrants remains unchecked at our southern border. This nation welcomes immigrants, but it must be based on merit.  Over the last 35 years chain migration has greatly exceeded new immigration.  Out of 33 million immigrants admitted to the United States from 1981 to 2016, about 20 million were chain migration immigrants (61 percent).   President Trump understands and knows the importance of adhering to established laws.  He is concerned with our people first and expects our immigration laws to be respected and honored by everyone, including our own people.

This nation will only remain great and exceptional if our Constitution continues to be respected, honored, and adhered to.  It is essential we make correct choices at the ballot box to elect candidates who respect all our laws.  Our forefathers made great decisions and effective laws that allowed our nation to become prosperous.  It is our responsibility to respect and honor those established laws, including those pertaining to immigrants and immigration.  Only then will this Republic have a chance to survive the many forces which are trying to remake this nation into one of their own liking.