The good news about black men in America 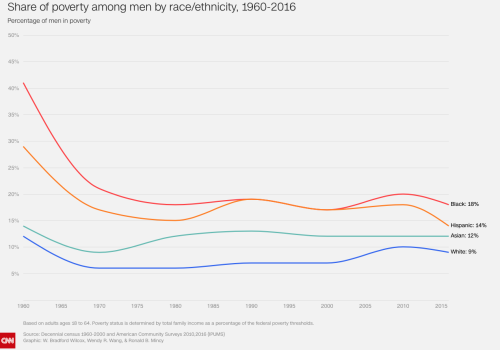 Despite a portrait of race relations that often highlights the negative, especially regarding black men (many Americans, according to a 2006 study by the Washington Post, Kaiser Family Foundation, and Harvard University, believed that crime, unemployment, and poverty are endemic among African-American men), the truth is that most black men will notbe incarcerated, are not unemployed, and are not poor — even if black men are more likely than other men to experience these outcomes.

In fact, millions of black men are flourishing in America today.

Our new report, “Black Men Making It In America,” spotlights two pieces of particular good news about the economic well-being of black men.

This good news is important and should be widely disseminated because it might help reduce prejudicial views of black men in the society at large, and negative portrayals of black men in the media. It should also engender hope among all African-Americans — particularly young black males. […]

So, what routes are black men taking to make it in America?

Tracking black men from young adulthood through their 50s using data from the National Longitudinal Survey of Youth 1979, we identified three factors that are associated with their success: education, work, and marriage.