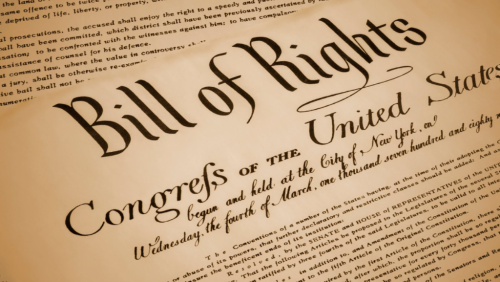 Reflections on the nature of today's demonstrations…

Right at the beginning of the Bill of Rights, our Constitution clearly protects American citizens’ right to speak freely on political issues.  The First Amendment promises that “Congress shall make no law… abridging the freedom of speech, or of the press, or the right of the people peaceably to assemble.”

The Constitution doesn’t grant them an audience; it doesn’t promise that anyone will listen to them, or read their writings or join in their demonstration.  It just allows them to do it, and leaves it up to local and state governments to manage reasonable conditions, such as volume, hours, permits, and public safety.

Today, we have more public parks to speak in than we did in the Founding era, and infinitely more publication outlets, from newspapers and magazines to local print shops and websites.  We have thousands of cable TV channels and radio stations; we have podcasts and CDs.  The means of getting one’s message out – without inconveniencing anyone – are practically unlimited.

Cities and park services set rules in place for the acquisition of permits for parades and demonstrations, setting reasonable restrictions on their ability to disrupt traffic or inconvenience commerce. Big cities must consider such issues as rush hour traffic and existing road closures from construction; the National Parks consider the many tourists who planned for months for this day to visit the Lincoln Memorial, the Washington Monument, or the Golden Gate Bridge, perhaps crossing the country to do it.

The minority of political activists have a right to be heard, the regulations rightly declare, but the vast majority of nonpolitical pedestrians and travelers have every right to go about their business unmolested as well.

In a republic, government is about finding balance.

And yet, today, we see more demonstrators than ever whose goal seems to be as much about inconveniencing others as making their political point.   Consider:

In an Independence Day protest by an illegal alien support group called "Rise and Resist," a Congolese immigrant named Therese Patricia Okoumo climbed the Statue of Liberty in New York Harbor, necessitating the closure of the monument complex while law enforcement tried to find a way to safely remove her.  They had a right to hold their picket signs (if they had a permit)… but did they have a right to cause the closure of the monument, making hundreds – possibly thousands – of travelers miss their opportunity to visit Lady Liberty, possibly the only chance of their lives to do so?

Protests against Immigration and Customs Enforcement (ICE) offices in Portland, OR disrupted the streets for weeks in late June and early July, as anti-border activists called for the closure of this entire federal agency and the utter elimination of border enforcement.  There have been numerous arrests for violence as protesters’ tempers got out of hand as the days went by.  Did they have a right to make their point?  Certainly. And there are thousands of ways in which to do so.  But how many crimes occurred in Portland that would not have occurred otherwise, because so many police were unnecessarily occupied with this overlong and illegal demonstration?  City police forces have limited resources; when necessarily repurposed for something avoidable, their normal purposes – routine patrolling of neighborhoods, follow-up on crime complaints, and hunting for suspects – are bound to suffer.  Viewed objectively, how does this labor-intensive interruption of proper law enforcement benefit society?

On Saturday morning, July 7, a Chicago demonstration “against gun violence” shut down the Dan Ryan Expressway, an important stretch of one of the nation’s major interstates, in order to draw attention to Chicago’s dangerous conditions.  The purpose seems illogical on its face – is there anyone in America who doesn’t already know that Chicago is currently the murder capital of the nation, or doesn’t know why?  But aside from such questions, we ask ourselves why necessitating the rerouting of traffic through those very dangerous neighborhoods, or causing highway traffic to sit for hours waiting for the protest to end, is considered valid at all.

A protester has a right to make his point; he has no right to force people to waste their time waiting while he makes it.  People are on their way to work, or to school… or to a hospital, wedding or funeral.  Such an intentional disruption of other people’s lives – stealing hours from them that can never be reclaimed – is as much a theft as robbing a home, car, or store would be.   People’s time is every bit as valuable as cash or jewelry.

A key summary of the libertarian philosophy – perhaps the best known, in fact – is the saying, “my right to swing my fist ends at the bridge of your nose.”  I have freedom, but not to the point at which I infringe on yours.

In other words, you have a right to offer your opinion, but no right to inconvenience anyone else in making it.

You can buy time on the radio or television, you can obtain a permit to hold signs in a park.  You can write a post on facebook or offer people flyers at the train station.  There are hundreds of ways to make your position known in America today.

But as President Calvin Coolidge, then Governor of Massachusetts, once said, “There is no right to strike against the public good.”  He was speaking of union activism, but the concept applies to public demonstrations just as well.  Too many protesters today are taking advantage of the ever-broader interpretation of the First Amendment, declaring that if you just call something “political speech,” then you can do anything you want in that name, no matter who else’s rights or safety are denied as a result.

Well, the abuse of a right must necessarily lead, eventually, to the curtailment of that right, and that would be an un-American result.  Our society must take a stand and cease its tolerance of this growing error before it’s too late.

It’s high time our cities and national parks enforce reasonable rules about public demonstrations.  The private sector gave us the internet, the printing press, the radio and television waves, all of which provide almost unlimited opportunities for communication without inconveniencing a soul.  There is simply no excuse for free speech to curtail the rights of others anymore.

When will our political leaders stand up for drivers on our highways and city streets? For our pedestrian traffic in busy downtowns? For the shoppers and retailers who want to do business, and the foreign and domestic tourists who want to visit our monuments?  We need to stop closing down monuments and parks, streets and highways, whenever some politically-connected agitator wants to inconvenience his fellow man.

This isn’t about the free speech of the protesters anymore; it’s about the right of everyone else – the law-abiding citizenry – to peacefully go about our day, without government enabling some parade of miscreants to disrupt it.

And yes, even if that right isn’t specifically mentioned in the First Amendment along with the others, it is a theme running throughout the core of our entire Constitution.  Our forefathers fought a revolution because a distant king used the power of government to inconvenience us.  King George III stationed his soldiers in our very homes, refused to let us do business with the vendors and customers we wanted, shut down our ports for days or months at a time.  And so we stood up to such interference, and declared our independence from it.

As our politicians allow mobs to drive us out of our downtowns, to shut down our parks and monuments, and now even to close down our highways, it’s time to remember what our Founders fought that War of Independence about.

John F. Di Leo is a Chicagoland-based international trade compliance trainer, writer and actor.  His columns are regularly found in Illinois Review.  Permission is hereby granted to forward freely, provided it is uncut and the byline and IR URL are included.