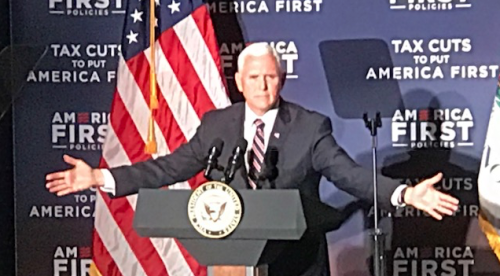 The “America First” tour hit the Chicago area last Friday with Vice President Mike Pence in town talking tax cuts. He spoke to about 900 supporters at a rally at the Westin Hotel in Rosemont, Illinois. Many people were in line hours before waiting to see the Vice President. This was the 17th stop for Pence on a nationwide tour saying that “tax cuts work.”

Earlier in the morning, the Vice President held a fundraiser for Congressman Peter Roskam at the Sheraton Hotel nearby.  No reason as to why Roskam did not attend was reported.  The Roskam event was $25,000 per couple and included a round table discussion where the donors were able to interact with Vice President Pence. 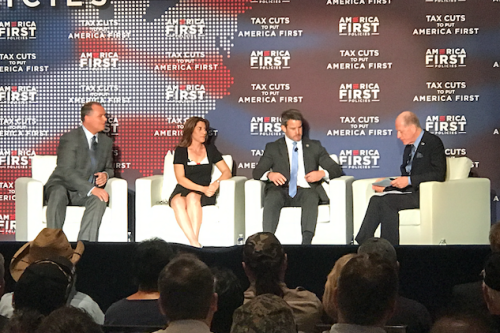 The event at the Westin started with a panel discussion on tax cuts including Congressman Adam Kinzinger, Troy Mertz, and manufacturer Nicole Wolter.  Illinois Governor Bruce Rauner then introduced the Vice President.
Rauner has not been supportive of President Trump so this appearance was a surprise to many.
After the introduction, Mike Pence spoke for about 40 minutes with many interruptions for applause. Unfortunately, there were four separate interruptions with protesters and hecklers that were quickly escorted out by police. At one point, an additional 40 uniformed police officers were stationed in the back of the room.  There were about 25 protesters outside, including one woman dressed as a handmaiden. For me, it interesting and fun to see the supporters of President Trump at these rallies.
Back in May, I saw the President in Elkhart, Indiana.  There were huge lines with 8000 people allowed in the school gymnasium to hear him speak with an additional estimated 15,000 outside that could not get in as the room was at capacity.
There was virtually no coverage of that fact.  My story can be found at
http://illinoisreview.typepad.com/illinoisreview/2018/05/wheres-weyermuller-visiting-elkhart-hoosiers-with-trump-and-pence.html
Mark Weyermuller is small business person, real estate professional, and conservative activist in Chicago. He is a citizen journalist and regular contributor to Illinois Review. Mark can be heard weekly on the radio in a "man in the street segment" at 5:31pm as a regular guest on the Stephanie Trussell Show heard Saturday afternoons 3-6pm on 50,000 watt WLS 890-AM.  This week Mark is “in studio” as a Co-host, Saturday at 3pm with David Smith from the Illinois Family Institute as the first guest.