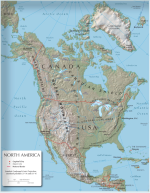 Every time the President talks about trade negotiations, it makes the news. On July 18, he mentioned – for the umpteenth time – that he might prefer to break NAFTA up into two agreements, and the press went ballistic again.

We have hundreds of major issues in United States politics – taxes, unemployment, crime, foreign policy – and people can talk comfortably about them because they are always on the collective mind.   But trade is different; it’s only an issue once every generation or so.  So this is an issue with tons of misconceptions, not only in the electorate, but in the business community, and particularly the press, as well.

For example, the press goes crazy at the idea of breaking up NAFTA, as if having two individual Free Trade Agreements (FTAs) would be weird.  Do none of these reporters know that the USA currently has FTAs with 20 countries – yes, twenty – and there are only two multiparty agreements in the bunch?

Our only multiparty FTAs are NAFTA and DR-CAFTA, and the press acts as if that approach is the norm!  Well, it isn’t, and for good reason.

Every developed country fears losing jobs to the more aggressive developing countries of the world.  The USA lost manufacturing jobs to Japan, then Japan lost jobs to China… now China is losing jobs to India and Vietnam. It is a normal enough cycle. We should be used to it by now.

But there are things we can do to retard that migration of jobs, even to turn it around.  Contrary to popular belief, companies really do not want to outsource things to third world countries half a planet away.  It requires tons of executive travel on expensive and miserable 14 hour flights, weeks and months away from family for engineers, designers, and production managers on the projects, massive expenditures on airfreight of molds and dies and test batches before product approval.  Everything about moving production abroad is more expensive, except for the assembly line labor.   Companies would rather live with higher labor costs than go through all the pain of outsourcing.

But there are other challenges too, challenges that do add up to drive manufacturers into the arms of these foreign plants.  We have regulatory challenges at home, a painful litigation climate, and crippling taxes.  Even as the federal government has started – finally – to ratchet down some of the federal tax rates and some of the federal red tape, plenty of our rust belt states, and others, still have a crippling tax and regulatory burden that continues to drive our manufacturers to foreign countries… countries that don’t try so hard, day in and day out, to drive employers away.

And we’re not alone.  There are other countries in the same boat we’re in.  Mexico, Canada, Australia, Western Europe, and many other countries have made the mistake of allowing their anti-business tax and regulatory systems to get worse and worse over the years.   So as they all suffer the same problems, driving their employers away, they sometimes team up to try to create incentives to get them to stay.

The Free Trade Agreement, or FTA, is one of these incentives.  A country’s government contemplates the question, “what could we offer our manufacturers to encourage them to stay put, and to continue making their products here, using more domestic labor, and more domestically sourced materials and components?”

Well, practically every country assesses duties on imports, so they figure, perhaps we can work out a deal with another country in the same predicament – another country that’s also losing manufacturing jobs to China, India, Vietnam and the rest – and perhaps we can agree to a reciprocal offering of duty-free status to goods made here with a predominance of domestically sourced components and domestic labor, so they deserve such a benefit.

We can work other things into these agreements, such as mutual recognition of intellectual property rights, labor standards, and environmental protection, but the lynchpin is always that mutual commitment to rewarding manufacturers for creating jobs for our own workers, through domestic sourcing and domestic labor.

The problem, as we’ve discovered in recent years, is that the negotiators who created these FTAs took their eye off the ball.  They got distracted by the labor rules, environmental efforts, IP rights and the rest, and wrote qualification rules that were perhaps too loose.

Today, many products can be made in the USA with very little original USA content, and still qualify for duty-free treatment under these FTAs’ ules of Origin.    Not all, by any means; many manufacturers issue NAFTA certificates on goods that don’t deserve them at all, putting themselves and their customers at terrible risk, because they don’t understand how the FTA qualification process works.    But even of those that truly do qualify under the Rules of Origin in the agreements, they often don’t really deserve it, under the traditional philosophy of FTAs, because so little domestic labor and so few domestic materials were used.

This is one of the keys to U.S. Trade Representative Lighthizer’s FTA re-negotiations.  The administration believes that the longstanding approach to FTAs – an approach that knowingly allows such a high percentage of components to be foreign – is contradictory to the interests of the FTA members… and not just the USA’s interests, by the way, but all the parties to the FTAs.

Some FTAs allow only one mathematical test: you analyze the costs of raw materials in the product’s Bill of Materials; if the domestic content is high enough, the product gets the duty-free benefit; if not, then it doesn’t.

But other FTAs sometimes allow multiple tests, and in some of them, a truly miniscule percentage of the raw materials can be domestic, but it still qualifies due to corporate overhead, profit, and tariff shifts.

There were good reasons for considering these options too – there really were – but in the end, if they allow a product to qualify that has no true domestic components whatsoever, is that consistent with the goals that prompted us to negotiate the deal in the first place?

Now we come to one of the key issues with multiple-party FTAs.   The components of all member countries are naturally considered to be privileged in these analyses, so for example, a NAFTA manufacturer is rewarded for components made in the USA, Canada or Mexico, any of the three.   The sophisticated manufacturer is therefore financially rewarded for sourcing the beneficiary components in not only his own country, but also from the agreement’s less expensive partners.  In NAFTA, therefore, a USA product will likely be overloaded with parts from Mexico because to source them from China would knock the finished product out of contention, while Mexican parts enable it to qualify for NAFTA benefits.

Again and again, we find that we have assembled a product in the USA or Canada, getting reciprocal duty-free treatment in the USA and Canada, but we’ve really only helped Mexico, the lowest-cost-country member of this agreement.

Take this point to the ultimate conclusion, and you have the awful proposal of the Trans-Pacific Partnership (TPP), in which expensive, developed countries like the USA, Canada, Japan and Australia are linked with low-cost undeveloped countries like Vietnam and Malaysia.  Our manufacturers would have been rewarded for continuing to assemble things here, but sourcing their components from Vietnam and Malaysia!

Many companies struggle with the complexity of these FTAs.  They are not user-friendly agreements, and the risk of Customs audits and penalties from issuing FTA certificates of origin to unqualified products understandably causes businesses to flail for potential solutions.  The idea of a single agreement, with one set of rules, reducing the number of sets to manage is certainly tempting to the business community.

When the agreements are all separate, there is only one way to be sure that one’s product is likely to pass the qualification tests: by sourcing the majority of materials from domestic suppliers.

Free Trade Agreements can be a wonderful plus; they can increase exports as well as imports, and bring great benefit to domestic manufacturing.  But only if designed with consideration for the component suppliers as well as the finished product suppliers.   What the Trump administration is trying to do is to bring that focus back into these many agreements; it is indeed a welcome and long-overdue correction.

One more element of historical review is worth remembering, by the way:  The USA’s first reciprocal FTA was with Israel in 1984.

Yes, we DID have a one-on-one FTA with Canada at one time, and it worked fine, but after just a few years, we made the choice to throw it out and create a multiparty agreement with Canada and Mexico instead.  Going back to separate agreements wouldn’t bring about the end of the world, but it could indeed bring about a resurgence in domestic manufacture of the components used in finished product manufacture.

Take apart any complex USA-made product – a refrigerator, washing machine, automobile, or factory machine.  It’s made up of dozens, or hundreds, or thousands of components, from sheet steel to aluminum extrusions, from motors and gears to nuts and bolts. Many of these are now made in China or Mexico.  If we redesigned the rules to reward our manufacturers for sourcing more of those components from fellow USA manufacturers, how can that be anything but a win-win?

It’s a complex issue, and a complex process.  Manufacturers are understandably concerned that any re-design of NAFTA or other agreements will require them to hire trade compliance experts to lead their IT and Sourcing groups in redesigning their processes.  There is work involved, and there could be more still.

But it is worthwhile work, isn’t it?  In the end, the goal is to improve our economy, and the economies of our friends… and to reduce the loss of manufacturing to far-off third world countries, where possible.

The fearmongering of the status-quo brigade, particularly on this issue, is groundless.

John F. Di Leo is a Chicagoland-based trade compliance manager, writer and actor.  He’s no foe of FTAs; he trains on their proper use for a living… so, he clearly sees the potential benefits of a thoughtful redesign, and has his fingers crossed for success in the USTR’s negotiations.   John’s columns are regularly found here in Illinois Review.