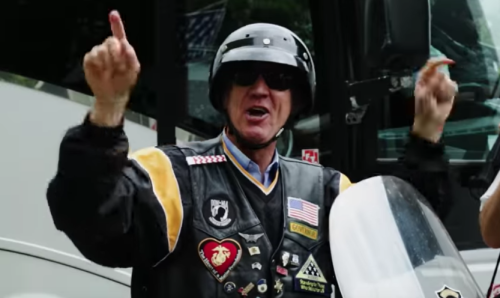 Those comments mocking Governor Rauner's helmet and riding gear in his recent campaign ad are not appreciated, Patrick "PJ" Jones, president of Chicago ABATE said in a statement Wednesday. ABATE – which stands for "A Brotherhood Aimed Toward Education" – describes itself as a "Motor Rights Organization."

Jones' rebuke of Rauner critics was included in an announcement of ABATE's state PAC's endorsement for Governor Bruce Rauner's re-election in November.

"Governor Rauner is a true motorcyclist, and we feel it's a slap in the face of all motorcyclists for someone to have called his riding apparel a COSTUME – we take our riding gear serious, and so does he," Jones said in a statement.

"The officers and members of the Chicago Chapter of ABATE of Illinois would like to congratulate Governor Bruce Rauner on this year’s endorsement by the Illinois ABATE State PAC committee," Jones said. "Bruce was a member before becoming Governor and has been a friend to all motorcyclists in the state. He has gone on many rides with the Chicago Chapter, and has supported many of the charities that we support including the Chicagoland Toys for Tots Parade and Shriners Hospitals."

Mike Fisher, Chairman of ABATE of Illinois PAC said Governor Rauner is committed to including the motorcycle community in relevant policy discussions. He also signed legislation to help increase the visibility of motorcycles on the road and helped the community raise funds for charitable causes.

"He has also promoted motorcycle tourism on Route 66 through his Annual Governor's Ride and supported legislation creating the Route 66 Motorcycle license plate," Fisher said. "ABATE of Illinois Political Action Committee is happy to endorse Governor Rauner for a second term."

"I am proud to have received the endorsement of ABATE of Illinois. As a motorcycle enthusiast, I am an advocate for their mission of promoting education, safety, and freedom, and will continue to work to improve the safety of all Illinois motorists and riders in a second term as governor," Rauner said in response.

Illinois Review has inquired about Rauner's view on requiring helmets on motorcyclists, something Illinois does not mandate yet. The response will be included in an update, as soon as the Rauner campaign responds.