McConnaughay to step down next Monday 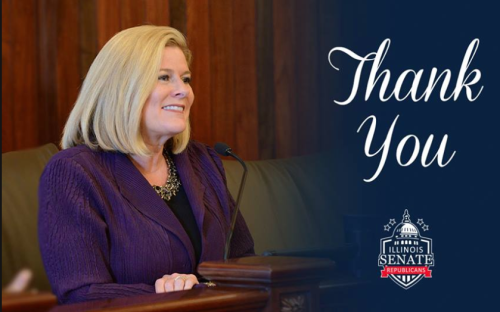 WEST DUNDEE – Illinois Senator Karen McConnaughay (R-West Dundee) says next Monday will be her last day serving the 33rd Senate District after being first elected in 2012. Her words as posted on Facebook Friday afternoon:

The day that every public servant faces has come.

Monday, September 3rd will be my last day as your State Senator in the 33rd District, and I want to take this opportunity to let you know what a true honor it has been to represent you in Springfield.

It was always my desire to do my part to make our communities better now and for future generations. I have been fortunate to work on a wide array of issues such as criminal justice reform, government reform, education, transportation, energy, economic opportunity and many more. This past year I was proud to have worked on legislation that now brings a higher level of transparency and accountability to the legislative ethics process in the general assembly.

Also, six years ago I came to understand human trafficking and what a heinous problem it is in Illinois and I am proud of the human trafficking task force that I co-chaired to create recommendations on combating human slavery. It is my hope the General Assembly will use that road map to create meaningful legislation to end this epidemic.

I leave frustrated and disappointed that the partisan politics in government today prevented us from doing more to protect families and provide accountable government.

I offer my sincere thanks for working with me on issues and the healthy dialog we shared. It is the people we meet, the views and values that are shared and the friendships that are made that have made this journey a cherished part of my life. I will forever be in awe by the courage and determination that I have witnessed as your public servant.

It has been an honor to serve you!

By Illinois ReviewIn a Facebook post on Tuesday, former...
Previous article
Rhoads: Movies that lie about history
Next article
Half of America wants Trump impeachment proceedings to begin