Cardinal Cupich: Church’s agenda “bigger” than to be “distracted” by sexual abuse claims 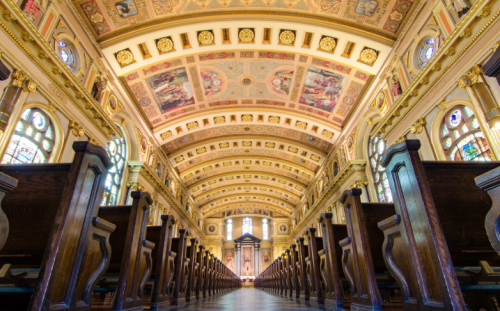 CHICAGO – The Chicago Sun-Times broke a story Monday that paints an even dimmer light on Chicago's Cardinal Blaine Cupich. The story allegedly retells a recent non-public meeting Cupich held with students and faculty at the Mundelein Seminary in Lake County.

One of those in attendance at the Mundelein Seminary revealed how horribly upset he was about the allegations of priest abuse in Pennsylvania and New York. Cardinal Cupich reportedly commiserated shortly, and then declared the Church has a bigger agenda than to be "distracted" by the reported abuse – something those in attendance were shocked to hear.

Cupich thanked the man for speaking up and said he, too, was sick over the situation.

Minutes later, though, the cardinal said something that struck some of the seminarians as “tone-deaf.”

“I feel very much at peace at this moment. I am sleeping OK,” Cupich said, according to the person in attendance, a man studying to be a priest, who recalled that some fellow seminarians shook their heads in “disbelief.”

The source said Cupich also told the group that, while the church’s “agenda” certainly involves protecting kids from harm, “we have a bigger agenda than to be distracted by all of this,” including helping the homeless and sick.

That account was confirmed by other sources, including another seminarian also present at the gathering.

This report, and others, of suspected corruption within the Catholic Church's hierarchy has stirred the Petersburg, Illinois-based Roman Catholic Faithful group to energize once again. From a statement posted by Matt Abbott:

In July 2009, the board members of Roman Catholic Faithful (RCF) elected to suspend operations after 12 years of fighting corruption in the Church. Our organization began after we learned the bishop of Springfield, Ill., the late Daniel Ryan, was paying young male prostitutes for sex. Soon afterward, calls for our assistance came from around the United States. We sponsored a number of symposia in cities across the country – and picketed the USCCB on at least two occasions.

Yet, we closed our doors after we became convinced that clerical corruption could not be fought simply on a piecemeal basis on a local level; rather, it became clear that the greater part of the post- conciliar Church had lost the Faith. We urged our supporters to attend the Traditional Mass whenever possible, to recite the daily Rosary, to live the life of grace and to pray very hard for the reform of the Church.

However, the events that have unfolded during the last several months, particularly the report of the grand jury that investigated the sexual molestation of children in Pennsylvania, have led us to believe that we must once more jump into the fray.

It has become impossible for us to read the grand jury report and stand idle. The various committees and commissions proposed by several bishops are a complete waste of time and money. This amounts to the wolves investigating the wolves.

So, the Roman Catholic Faithful says, this is what they plan to do:

We are going to put your diocese and episcopal sees under a microscope. We are willing to crawl into the darkest dens of depravity where children are molested and expose this entire network and enterprise to the public. To those of you willing to assist us and cooperate, we thank you in advance. For those of you who will oppose our crusade, let me make this clear: We are going to name names and take whatever remedial action we find necessary, including picketing, urging boycotts of financial contributions by parishioners and … well, let's just say we have a few other ideas as well.