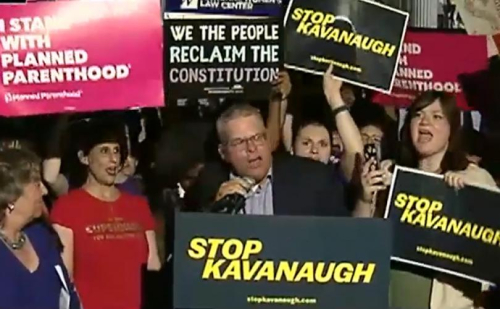 CHICAGO – Wednesday afternoon, Leftists hysterical about Brett Kavanaugh's nomination hearing will be turned the screws on their favorite longtime Democrat in the US Senate – Dick Durbin. They're planning to tell Dick Durbin "Voting NO is Not Enough!" in front of his Chicago residence on Lakeshore Drive at 5:30 PM.

The protesters say Brett Kavanaugh’s confirmation to the Supreme Court "would be a disaster for decades."

"With this nomination, the Trump/Pence regime is poised to impose an extreme and long-lasting transformation on the highest court in this country—a major leap in the consolidation of fascism," the press release says.

UPDATE: Here's the turnout in front of Durbin's Chicago residence (Thanks to Mark Weyermuller for stopping by and sending us the photos!) 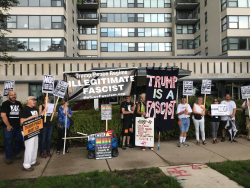 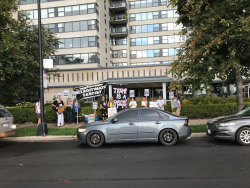 Here's the rest of the press release in it's entirety – it would be hard to state it with the same impact the protesters expect to inflict:

This is an emergency that requires an emergency response to STOP it; raising "concerns" and "objections" is not enough. Yet leading Democrats refuse to commit to enforce "no" votes from party members like Doug Jones—much less do anything to delay or shut down the hearings. In fact, just this past week, Senate minority leader Chuck Schumer (D) even agreed to expedite confirmation of another 15 federal judges nominated by Trump. Trump has now put one in seven federal circuit court judges on the bench.

And Dick Durbin, the second most powerful Democrat in the Senate, has not even said he will oppose Kavanaugh. He says it would be a mistake to boycott the hearings, and he provided cover for this illegitimate nominee when he recently repeated Kavanaugh's false claims about his "amended views" on whether presidents are subject to the rule of law. Although Durbin talks about how we're in a brewing constitutional crisis, he and other leaders of the so-called opposition party say that impeachment is off the table, not because they don’t have a majority, but because it must be bipartisan—an impossibility because the Republican Party has essentially transformed into Trump's party.

Yesterday, on day one of the hearings, Durbin talked about "authoritarian forces threatening our democracy," and then sat through the rest of the proceedings as if politely questioning this illegitimate nominee is the appropriate response to this crisis. Politico reported that Durbin and others considered walking out of the hearings and rejected that plan, saying, "A high-profile walkout might have heartened liberals, but it probably wouldn’t have converted any swing voters."

This is the logic of capitulation to fascists. Even Joe Scarborough (a former Republican) yesterday said, “why would the Democrats even show up [to these illegitimate hearings]?”