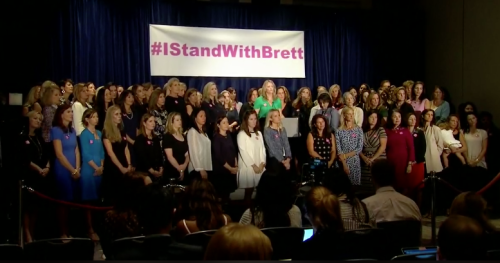 In a letter sent to the Senate Judiciary Committee last Friday – soon after the first accusations from a woman claiming Kavanaugh attempted to rape her when she was 15 and he was 17 years old – the 65 women wrote:

Brett attended Georgetown Prep, an all-boys high school in Rockville, Maryland. He was an outstanding student and athlete with a wide circle of friends. Almost all of us attended all girls high schools in the area. We knew Brett well through social events, sports, church, and various other activities. Many of us have remained close friends with him and his family over the years. Through the more than 35 years we have known him, Brett has stood out for his friendship, character, and integrity. In particular, he has always treated women with decency and respect. That was true when he was in high school, and it has remained true to this day.

One of the signers made a statement about how the letter came together so quickly when suspicions arose, CBN News reports:

But one of the signatories, Meghan McCaleb, is making it clear that the outpouring of support was a testament to Kavanaugh's character and that neither the Senate Judiciary Committee nor the White House had a hand in coordinating the letter.

"My husband and I have known Brett Kavanaugh since high school," McCaleb said in a new statement. "Last Thursday afternoon, September 13, a reporter contacted my husband asking about news reports that Senator (Dianne) Feinstein had referred to federal authorities an allegation from a woman to the effect that Judge Kavanaugh had acted improperly toward her during high school."

"Having known Brett well in high school, my husband and I were shocked by these news reports," she continued. "We agreed that we needed to inform the Judiciary Committee of Brett's high character and integrity from high school through the present day. We reached out to one of Judge Kavanaugh's former law clerks to discuss preparing a letter from the women who knew Judge Kavanaugh best during his high school years."

"Through a group effort with other friends of Judge Kavanaugh, we prepared the letter that ultimately was released," McCaleb recalled, noting that the missive "was not coordinated with anyone at the White House or the Senate Judiciary Committee."