Our shrinking and overworked military can barely pass inspection 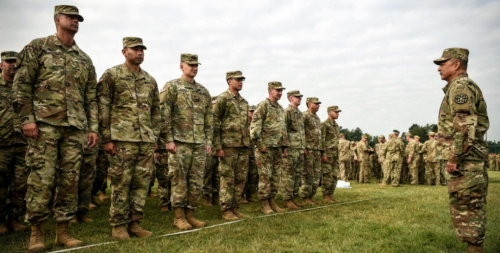 The U.S. military is not equipped for the threats it will face. Dakota L. Wood writes:

The sustained counterinsurgency, counter-terrorism, security/stability, and train/advise/assist missions of the past 17 years haven’t required U.S. forces to deal with an enemy that possesses combat aircraft, a navy of any sort, armored formations, missiles, or even multiple launch rocket artillery. In short, we’re out of practice.

The Army is just now getting a handle on what it will take for its operational units to gain competency in major land operations. It has invested heavily in realistic training for its heavy brigades at the National Training Center at Ft. Irwin, Calif. That’s good, obviously, but the learning curve has been steep, and they are only now discovering just how far they need to go to regain the big-battle competence of the Army they used to have.

The Marine Corps is wrestling with the implications of a naval campaign against a major competitor like China. Initial insights indicate that its portfolio of ground equipment and weapons, and supporting vessels operated by the Navy, may have to substantially change to be relevant in highly contested waters.

The Air Force is challenged by too few planes and a large deficit in pilots. During the Cold War, pilots would typically need 200 or more training flight hours to be considered competent for the rigors of air battle against their Soviet counterparts. Today, the average fighter pilot gets less than 140 hours per year. F-35A pilots are averaging roughly 75 hours a year.

The Navy has plans to grow its fleet from 285 ships to 355. But it takes time to build ships, even after you get the necessary funding, so we shouldn’t expect this needed fleet to be reached until the year 2050. By comparison, China is on track to achieve a fleet of 350 ships by 2020. With no reduction in the demand for U.S. navy ships in key seas stretching from the Sea of Japan to the North Atlantic, the Navy is hard pressed to catch up on years of deferred maintenance, which limits its ability to improve ship availability for the training it needs to prepare for “great power competition” and to slow the aging of the vessels its does have in the fleet.

By Illinois Review In an unscientific Twitter poll conducted...
Previous article
Growing National Debt Threatens the Current Economic Boom
Next article
Will Washington regulate Facebook, Google and Twitter? Or hand them a stranglehold on a silver platter?