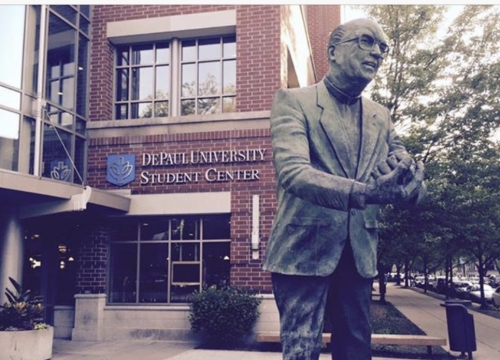 Is free speech at DePaul University a relic of the past?

Candace Owens and Charlie Kirk of the conservative nonprofit "Turning Point USA" are no longer set to speak at DePaul Oct. 16, 2018.

The school's Associate Vice President of Student Affairs Rico Tyler pulled the plug on the event because of what he referred to as “concerns regarding violent language at the sponsoring organizations national convention as well as identified populations being singled out in a demeaning fashion …" (Editor's UPDATE: See copy of Tyler's letter below)

According to their website, Turning Point USA has a presence on over 1,300 college campuses and high schools across the country. A press release from Charlie Kirk and Turning Point USA stated the following:

At this point it’s clear, we’ve been blocked from campus simply because we’re conservative. DePaul’s plan was to delay, delay, delay, and then claim there was no longer ‘enough time.’ We will not let them get away with this deception. They never intended to let us speak and they used every bureaucratic tactic in the book to restrict our speech.

This is discrimination plain and simple and it’s yet another example of why conservatives must keep fighting campus radicals to ensure conservatives have a voice at America’s universities. They have only emboldened us.

DePaul University, a Catholic Church-affiliated school that does does not pay property taxes, has been criticized for blocking conservatives speakers such as Daily Wire editor and talk show host Ben Shapiro.

In 2016, Shapiro was invited to speak at DePaul, but was threatened with arrest of campus security when he tried to enter the building. Much like Turning Point is doing this time around, Shapiro held an off-campus speech.

Also in 2016, controversial author Milo Yiannopoulos had a speech disrupted and abruptly canceled on DePaul's campus. The group Black Lives Matter took credit for this. No arrests were made, and speculations are that DePaul Security and Chicago Police may have had a "stand down" order.

This year, conservative comedian Steven Crowder was approved to speak at DePaul; however, the invitation was later withdrawn by DePaul administrators.

Adding credence to what appears to be a biased policy on free speech, last spring DePaul hosted an Israeli Apartheid Week .

Fortunately for Chicago area conservatives, Charlie Kirk and Candace Owens will still be speaking at an off-campus location on Oct. 16, 2018. The event has been moved to the JW Marriott at 151 West Adams Street in downtown Chicago a short distance from the DePaul downtown campus.

There is no cost to attend, but you must have a ticket. RSVP link can be found here.

Mark Weyermuller is small business person, real estate professional, and conservative activist in Chicago. He is a citizen journalist and regular contributor to Illinois Review. Mark can be heard weekly on the radio in a "man in the street segment" at 5:31pm as a regular guest on the Stephanie Trussell Show heard Saturday afternoons 3-6pm on 50,000 watt WLS 890-AM.

Max Rice is an energy professional with a passion for politics.