For many of the lieutenants in the IL GOP, weak central leadership is by design. It’s allowed them to create their own little fiefdoms throughout Illinois. Pockets of Republican control in various counties and cities throughout Illinois where local chairs exert control over local committeemen and precinct captains.

But weak central leadership has left the IL GOP, utterly unmatched in power against the Chicago Machine and the Democratic Party of Illinois.

Governor Pritzker deemed entire classes of businesses and American workers as “non-essential” and shut them down. And he shut down our public schools and forced children as young as 2-years old to wear masks.

In the two years since, Illinois Republicans in Springfield, who have held a superminority in our General Assembly, were powerless to even convene the legislature. Governor Pritzker has continued his “Supreme Executive Power” even still to this day, and the Democrat supermajority shoved through terrible laws like the SAFE-T Act.

At the same time, the weak leadership at the top of the IL GOP did nothing to stop the Democrat tyranny, but only worked to muffle the voices of conservative grassroots activists and cut short the campaigns of conservative candidates. In fact, we recently discovered that in the height of the pandemic, IL GOP chairman Don Tracy’s family-owned business, Dot Foods, was donating thousands of dollars to Biden’s presidential campaign.

It turns out that the hard times of 2020 created something different in Illinois: Strong Women.

In the absence of leadership, mothers fighting for their children rose to fill the vacuum in IL GOP leadership. By necessity, because no one else would fight for our children.

Massive women’s activist groups took form during Summer 2020, growing their ranks to 10,000-plus members each. One such activist is Christina Clausen, of Will County, an incredibly smart and successful businesswoman who galvanized more than 10,000 mothers, or “Mama Bears,” to form the group Illinois Patriots.

Other impressive groups like Awake IL led by Shannon Adcock and Freedom Illinois led by Chrissi Bretz, have amassed tens of thousands of members, most of them mothers, who put pressure on school boards to reopen schools and stop mask mandates.

Over the past year, members of all these mother’s groups volunteered tens of thousands of hours for conservative candidates all across Illinois. From the eastern half of Illinois to the western edge, from the Collar Counties to Champaign to Cairo, these women door knocked, attended events, and did everything they could to fight against Democrat tyranny.

They did so alone, without the help of the IL GOP. In fact, calls from leaders of these mother’s groups, like Christina Clausen, to IL GOP Chair Don Tracy went unanswered and unreturned.

As the calls for Tracy to resign reach a fever pitch, it might be time for Illinois Republicans to ask: is it time for a woman – a “Mama Bear” – to lead our party? 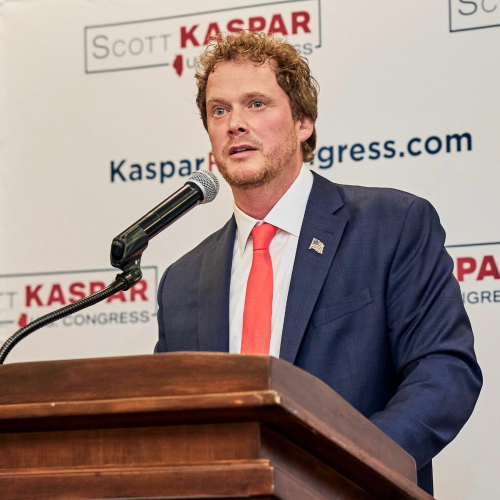